We use cookies to provide you with a better experience. By continuing to browse the site you are agreeing to our use of cookies in accordance with our Privacy Policy.
Home » Highlights from the 2014 NSC Congress & Expo
Leadership

Highlights from the 2014 NSC Congress & Expo On Sept. 16, during the 2014 NSC Congress & Expo, OSHA and the National Safety Council renewed their Alliance – agreeing to work together to foster safer and healthier workplaces. Here, OSHA administrator David Michaels and NSC President and CEO Deborah A.P. Hersman offer their shared view on the importance of employer investment in safety.

When Paul O’Neill became CEO of Alcoa, he gave every employee his home phone number and asked them to call any time of day if they identified something that put them or a co-worker at risk. O’Neill was sending a clear message to his employees: Keeping them safe was his No. 1 priority – above profits and production.

Yet, 12 workers are killed on the job every day in the United States, and more than 10,000 suffer a serious injury.

The numbers of deaths and injuries have improved significantly since passage of the Occupational Safety and Health Act more than 40 years ago. But far too many workers still do not leave work in the same condition that they arrived.

Workplace injuries, illnesses and fatalities take an enormous toll, not only on workers and their families, but also on our nation’s economy and businesses. Fatal and nonfatal work injuries cost our economy $198.2 billion each year – that’s over half a billion dollars every day!

Investing in safety makes financial sense. Unfortunately, misperceptions abound about the cost of providing safe and healthful workplaces. Some employers believe compliance with federal safety and health standards will be too costly. Many have an “it won’t happen to me” attitude, and others simply prioritize financial gains over protecting people. But data shows that investing in safety is not just prudent, it is also profitable.

This is demonstrated routinely at companies that belong to the Campbell Institute, the global Environmental, Health and Safety (EHS) center of excellence at the National Safety Council. Schneider Electric, DM Petroleum and Fluor Hanford – all winners of the prestigious Robert W. Campbell Award – saw reductions in workers’ compensation costs following implementation of strong EHS programs.

Once employers understand the connection between safety and financial health and wellness, many act accordingly.

Creating a safety culture is not a singular moment; it’s a journey. Employers must commit to continuous risk reduction with a goal of zero injuries. Even employers with world-class safety programs have to double down and recommit to safety every day.

Actions speak louder than words. If safety is the cornerstone of business vitality and achieved through risk reduction, leadership and employee engagement are linchpins.

Not every CEO must give employees a personal phone number. But every CEO must be a watchdog not only for the financial well-being of the company, but for the welfare of his or her employees. The best CEOs understand that the two are not mutually exclusive. 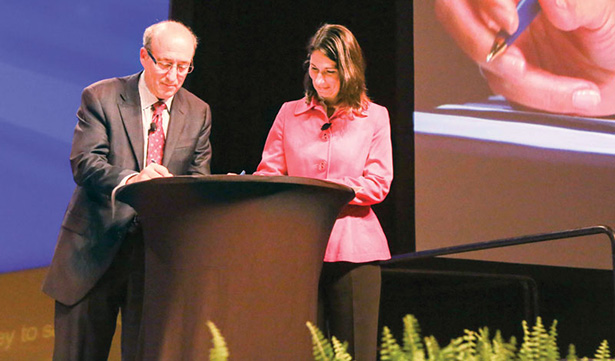