We use cookies to provide you with a better experience. By continuing to browse the site you are agreeing to our use of cookies in accordance with our Privacy Policy.
Home » State of Safety 2015
Federal agencies Worker health and wellness Safety culture
IMPORTANCE OF DATA ACCURACY More routine reporting of injury and illness records could help improve data accuracy, Wuellner said. If employers report their records to the government more frequently, she said, recordkeeping requirements might have a stronger presence in the workplace.

The Improve Tracking of Workplace Injuries and Illnesses rule – an OSHA rule in the works as of press time – would require certain employers to submit their annual injury summary to the agency each year. Employers who keep records and have more than 250 workers would have to submit injury reports on a quarterly basis. (See More data, more problems? Safety+Health, December 2014.)

Under the proposed rule, OSHA would collect injury reports from about 440,000 establishments – more than double the amount that currently receives the annual BLS survey.

“OSHA could collect data from many more employers and potentially, in that case, be able to see things that the BLS isn’t able to see in its data,” Boden said.

Or maybe not. Because OSHA’s proposed rule relies on employers to collect injury information, many problems associated with undercounting could still exist.

Some stakeholders believe that employers are not always truthful about injury data, as it may be used for a variety of business practices such as winning contractor bids or internal financial awards.

“People are uncomfortable with the idea that the reporting is being done by the employer, so there will always be a suspicion of ‘Are they hiding something?’” Wuellner said. 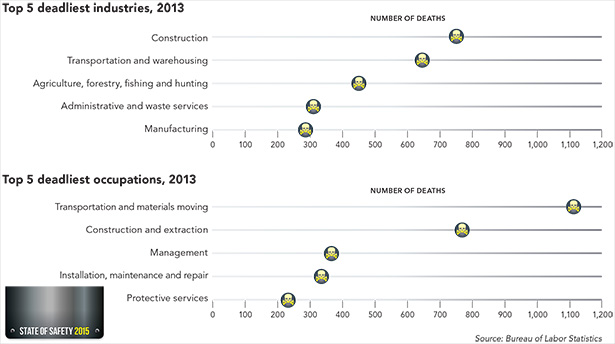 Some stakeholders have suggested that using non-employer-provided information could improve the accuracy of injury data. This has been done before. In the 1980s and early ’90s, BLS and state-based researchers found that 50 percent of all occupational fatalities were not being reported. For example, in 1990, BLS estimated only 2,900 work-related fatalities. In contrast, the National Safety Council estimated more than 10,000, and NIOSH estimated about 5,700 in 1989. This led to BLS revising how it counted fatalities by looking at multiple sources, according to Boden.

One suggestion for supplementing the current BLS survey is to use workers’ compensation data. Although not all workplace injuries could be captured using this data, those that may fall through the cracks in one system might be caught by another.

But using multiple data sources can have drawbacks as well. Matching the data sets to ensure injuries are not double-counted is laborious, Kolosh said. The process would take longer and be more costly, resulting in a delay in when the data is published. (BLS currently releases its injury data for any given year near the end of the following year.)

“If I was anxious to benchmark my performance with national averages, I would want those benchmarks as soon as feasibly possible,” Kolosh said.

Further complicating matters is the lack of uniformity. Workers’ compensation is handled by individual states, and every state operates differently.

Wuellner said a combination of two systems might be a solution: Employers may receive timely SOII data for a national picture, but more detailed information from multiple sources could come later.

Even in this scenario, workers’ comp data is still not easily comparable from state to state, Wuellner said. Safety prevention efforts relying on workers’ comp data would have to come from within each state, requiring individual states to know and understand their data sources, as well as have the resources to implement prevention efforts, she noted.

Illnesses: An even larger issue?

Is the undercounting of occupational illnesses even more severe than that of injuries?

Illnesses account for only 10 percent of all nonfatal cases identified by the Bureau of Labor Statistics. This ratio does not match up with occupational disease-related fatalities, which some estimates show greatly outnumber deaths due to occupational injuries, according to a commentary published in a special issue of the American Journal of Industrial Medicine (Vol. 57, No. 10).

The commentary even said the title of the BLS survey used to gather data – the Survey of Occupational Injuries and Illnesses – is a misnomer because of the very low estimate of occupational illnesses captured. However, other sources, such as workers’ compensation data, are equally poor at estimating occupational illnesses, said Les Boden, a professor of environmental health at Boston University’s School of Public Health.

“It’s generally accepted that BLS and workers’ compensation data are of virtually no use in surveillance of chronic occupational diseases,” Boden said.

The SOII has trouble tracking occupational illnesses primarily because of the long period of time in which diseases develop, according to the commentary. The survey is designed to capture immediate, acute incidents that are easily identifiable as work-related – which is the case with many injuries.

Further, employers and health care providers may not recognize an employee’s disease as work-related.

Steps are being taken to resolve the matter and get a more accurate count of occupational-related illnesses. The Office of the National Coordinator for Health Information Technology is encouraging health care providers to adopt interoperable electronic health records. Doing so would allow better sharing of vital information that could lead to improved treatment for ill workers.

Meanwhile, NIOSH is working with various organizations to develop standards to ensure employees’ occupational information is included in data collected by the electronic records. This could help doctors determine whether a chronic illness is related to workplace exposures.

Health care providers would need a lot of training to ensure the relevant occupational information is included in the electronic health record, but the result could be a more accurate occupational illness count, according to Ken Kolosh, statistics department manager at the National Safety Council.

“If physicians could start tracking work-relatedness in medical records, that could go a long way to start identifying the true impact of occupational illnesses,” Kolosh said.

Despite these issues, the BLS survey data has value. Boden pointed out that the data can highlight the biggest worker safety issues, alerting safety professionals and researchers to the types of injuries occurring, as well as growing developments.

“If I’m an employer, then I want to find out quickly that there’s some emerging problem in the workplace,” Boden said. Whether that problem results in 100 cases or 200 cases is not as important as knowing about the problem in the first place, he said.

The overall trend of declining injuries is likely to be accurate, too, according to Kolosh, as it mirrors declining fatality figures. The undercounting of injuries also is likely to be uniform, suggesting the proportions of individual types or causes of injuries would remain unchanged by more accurate data, Boden said.

Even so, many stakeholders agree that the undercounting of BLS data is a problem, and more accurate data is necessary.

“Ultimately, if the goal is to prevent injuries in the workplace, that occupational injury data is crucial,” Wuellner said.

The Bureau of Labor Statistics delayed the release of 2013 nonfatal occupational injury and illness data, which at press time was not fully available. The delay stemmed from data processing errors unrelated to the undercounting problem explored in this article.

Read about updates on nonfatal data from BLS.