We use cookies to provide you with a better experience. By continuing to browse the site you are agreeing to our use of cookies in accordance with our Privacy Policy.
Home » Working (safely) from home
Office safety Lone workers Injury prevention Checklists/Forms
REMOTE WORK CHALLENGES In the mid-1980s, the state of California wanted to take a closer look at the possibility of allowing some of its employees in the public sector to work from home.

Fleming proposed a telecommuting pilot program, which the state accepted and selected him to direct. The program proved to be such a success that, by 1990, California had passed legislation that formally established telecommuting as public policy in the state. Several years later, Fleming was part of a panel that briefed Congress on the subject.

Throughout the process, Fleming said, safety and liability were part of the conversation.

At organizations, universities and other agencies across the country, safety professionals and human resources directors face a challenging task: ensuring safety for the increasing number of employees who are out of sight, working remotely from a home office.

Safer employees make for better employees, regardless of where their office is located.

“It all falls back on the responsibility of the worker,” said Amy Artuso Heinzen, a program manager with the National Safety Council who specializes in home and community safety. “But the company should have mechanisms in place to provide education on ergonomics and safety checklists. There are many injuries and conditions that could result that are very preventable. That makes it a legitimate concern.”

Fleming agreed. “It’s another form of work where safety and health certainly plays a role,” he said.

Put it in writing

With technology improving, commute times increasing and executives looking to reduce operating expenses, more organizations are turning to telework as a viable alternative.

Similar to other employers, ASHA does not enter workers’ home offices to perform safety checks. But the association does emphasize the importance of home office safety as part of a telework agreement that employees must accept before being allowed to work from home. “ As part of our agreement that we have with our telecommuters, they confirm that they have a dedicated work space at home and that it’s safe,” McNichol said. “We talk about some of what that means. We want them to minimize the risk.” 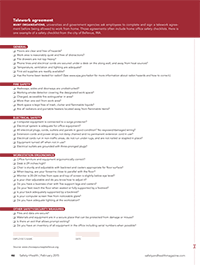 Although teleworkers are expected to maintain the safety of their personal worksites, Shih said, managers can support safety by using the lists as a form of communication.

“So, while the employee has primary responsibility regarding the physical and informational safety of their home, managers can certainly help employees be successful by giving them information, resources and guidance,” Shih said.

Telework in the federal government increased to 10 percent from 8 percent between September 2011 and September 2012, Shih said. He added that President Barack Obama and OPM Director Katherine Archuleta were “extremely supportive” of telework.

“Telework can be a crucial tool in terms of ensuring that the government continues to operate in times of national emergencies, crises or even in weather-related conditions like snow days,” Shih said. “We’ve seen that in recent years – when the government did shut down in Washington because of massive snowstorms, a significant percentage of employees were able to continue working at home.”

Although many treatable home office injuries may go unreported, several serious injuries have led to court cases during the past 15 years.

In one case, a Utah man was working from home, waiting for a package to be delivered by his company for an upcoming business trip. A winter storm had dumped several inches of snow the night before, so the man went outside to spread salt on his driveway before the postal carrier arrived with the package. The man slipped and fell on the driveway, sustaining a neck injury that caused him to become a quadriplegic. In 2000, the Utah Labor Commission ruled that the man was entitled to workers’ compensation because his injury arose out of, and during the course of, his employment.

In 2010, an interior decorator who was working from home was injured when she tripped over her dog while walking to her garage to look at fabric samples. The Oregon Workers’ Compensation Board denied her claim, but the ruling was reversed by the state’s Court of Appeals, which argued that her injury occurred during the course of her employment.

However, telework may prevent many more injuries than it causes. The most dangerous part of a worker’s day typically is the time spent behind the wheel, regardless of the reason for the trip, according to the Network of Employers for Traffic Safety, an organization that works to improve the safety and health of employees. This past summer, Vienna, VA-based NETS launched a campaign to help employers foster a culture of safe driving.

McNichol said it is easy to see how telework could improve safety and health.

“It definitely should,” McNichol said. “We’re spending a lot of hours on the road, and there are health ramifications that are tied to decreased fitness and having additional health risks when you have a long commute. Because it cuts into time when people otherwise would be active or maybe preparing a healthy dinner.”

“It’s become institutionalized,” Fleming said. “There will always be a suspecting employer and other reasons why they would want the employees to be within sight, but the virtual work world is here to stay. It’s not going to go away.”