Industries and job titles varied, but safety professionals offered a positive overall forecast for themselves and their colleagues going forward.

Only 5 percent of respondents said they expect layoffs within their department in the next 12 months. Fifty-four percent expect no change in staffing levels, while 24 percent anticipate adding staff and 14 percent said they were not sure. 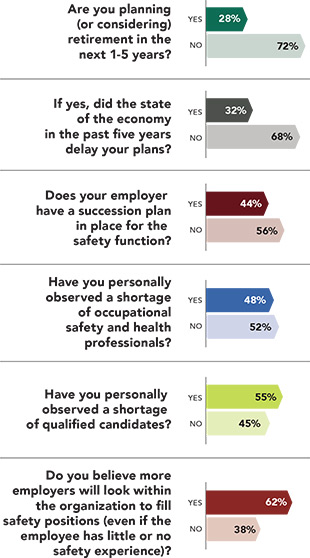 The demand has accompanied an apparent shortage of safety professionals. Nearly half of respondents said they personally have observed a shortage of professionals in the field, and 55 percent said they have observed a lack of qualified candidates for vacancies. In its 2011 report, NIOSH estimated that about 13,000 trained students would graduate by 2016, compared with 25,000 job openings. That represented a shortfall of about 12,000.

“We can’t infer that all of the hires projected over the next five years would have to be filled with new graduates,” Felknor said. “Those could be filled with people already in the workplace and moving into another position. Nonetheless, it’s still a substantial shortfall.”

The survey results support Felknor’s theory. Sixty-two percent of respondents said they believe employers will look within the organization to fill safety positions – even if candidates lack safety-related work experience.

“In the major discipline professional associations related to OHS, the membership is aging and the workforce is graying,” Felknor said. “We know in the United States in general – and our field is not an exception to that – people are working longer.”

Eventually, the next generation will need to step forward to fill the vacancies created by retired safety professionals. A shortfall of young workers in the field could create problems for organizations looking to promote safety.

“Because people are working longer, we can’t predict precisely when a graying workforce will become an issue for employers,” Felknor said. “And that’s one of our concerns and one of the things that we try to address as innovatively as we can in terms of training we support. You really want to be on the front end because to try to resolve it on the back end is a little late.”

Next page: Most wanted skills for future safety pros >>