We use cookies to provide you with a better experience. By continuing to browse the site you are agreeing to our use of cookies in accordance with our Privacy Policy.
Home » Campbell Institute names award recipient, welcomes new members
Show Daily Leadership 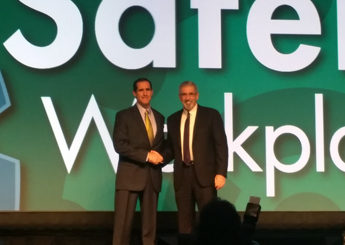 Atlanta – Honeywell Aerospace has earned one of the most esteemed awards from the National Safety Council: the 2015 Robert W. Campbell Award, which is presented annually to an organization that showcases excellence in environmental, health and safety management.

Honeywell Aerospace received the award Sept. 27 at the Campbell Award Reception and Gala, during the NSC Congress & Expo.

Safety is a core value at Honeywell Aerospace, whose focus includes creating and manufacturing technologies, products and services for aircraft and automobiles across the globe.

“While Honeywell Aerospace is known for manufacturing world-class products to keep all of us safer in flight, today they are receiving the Campbell Award because they are best-in-class at keeping their workforce safe,” Deborah A.P. Hersman, president and CEO of NSC, said in a press release. “Honeywell Aerospace is far along on its Journey to Safety Excellence, yet it still strives to do better – the hallmark of a world-class organization.”

Established in 2004, the Campbell Award is named for Robert W. Campbell, the first NSC president and safety pioneer.