We use cookies to provide you with a better experience. By continuing to browse the site you are agreeing to our use of cookies in accordance with our Privacy Policy.
Home » Salary Survey 2015
Statistics Performance measurement Infographics
Salary Survey 2015 Geography played a role in salaries for safety professionals. The region with the largest percentage of high salaries proved to be the Mid-Atlantic states of New York, New Jersey and Pennsylvania. In that area, more than one-third (36.6 percent) of safety professionals earned $100,000 or more.

The area with the lowest percentage of six-figure earners was the Great Lakes region of Illinois, Indiana, Michigan, Wisconsin and Ohio (27.7 percent). The regions with the second and third lowest percentage of high salaries, respectively, were the South Atlantic (28.8 percent) and the East South Central states of Alabama, Kentucky, Mississippi and Tennessee (29.9 percent). 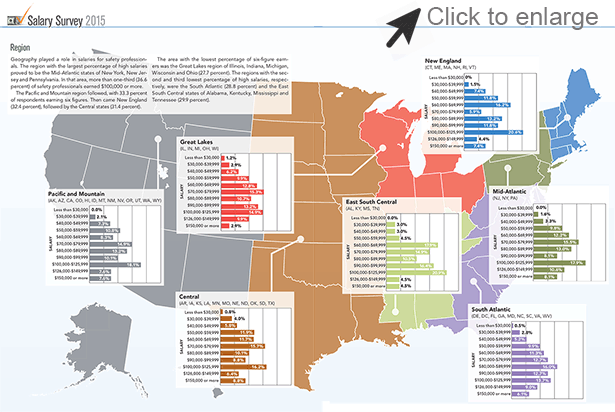