We use cookies to provide you with a better experience. By continuing to browse the site you are agreeing to our use of cookies in accordance with our Privacy Policy.
Home » In the back seat? Better buckle up, GHSA says

In the back seat? Better buckle up, GHSA says

Washington – The Governors Highway Safety Association is calling on all rear-seat passengers to buckle up in light of a new report showing that nearly 1,000 people killed in motor vehicle crashes while in the back seat in 2013 were unrestrained. 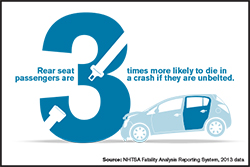 “It’s important to remind folks that seat belts are there to protect them – in both the front and back seats,” said report author James Hedlund.

Of the 883 unrestrained rear-seat passengers age 8 or older who were killed in 2013, more than 400 would have survived had they been buckled, according to the report. Nationally in 2013, rear safety belt use was 78 percent, compared with 87 percent of front-seat passengers who buckled up.

Back-seat safety belt use also is advisable when passengers are riding in for-hire vehicles such as taxis.

Twenty-two states do not require safety belt use in the back seat. Of the states that require it, only 18 and the District of Columbia have a rear-seat safety belt law with primary enforcement – meaning drivers can be ticketed without first being stopped for another violation. GHSA recommends states enact primary enforcement laws for rear-seat safety belt use, and urges the public to buckle up regardless of where they are sitting in the vehicle.