We use cookies to provide you with a better experience. By continuing to browse the site you are agreeing to our use of cookies in accordance with our Privacy Policy.
Home » A look back at the 2019 NSC Congress & Expo
Leadership Distinguished Service to Safety Award recipients agree: 'There's not a much bigger honor' 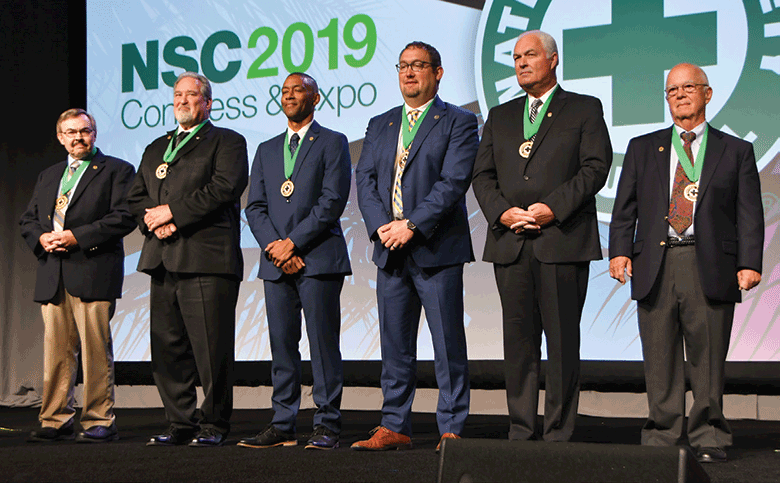 The experiences resonated immediately: Sievert knew in second grade that he wanted to be a safety professional. When a teacher asked him to name his ideal adult occupation, Sievert responded with "safety engineer."

"The teacher said to me, 'Will you work on a train?' Because nobody really knew what it was in those days," said Sievert, now the lead instructor at the National Safety Council of Northern New England in Concord, NH.

Awareness of the occupational safety and health landscape has advanced markedly since Sievert's youth, a point on which he reflected Sept. 9 before accepting a Distinguished Service to Safety Award during the Opening Session of the NSC 2019 Congress & Expo.

NSC awarded the DSSA – its highest honor – to six safety professionals, highlighting each recipient's exemplary lifetime efforts in improving safety and health. Sievert wasn't the only winner who channeled his father.

"My dad put it best when I told him about the award," said Travis Parsons, associate director of OSH at the Washington, D.C.-based Laborers' Health and Safety Fund of North America. "To receive an award where you're nominated and praised by your peers, both the people you work beside every day and your leadership that you work for, which is what this encompasses, there's not a much bigger honor when it comes down to it."

NSC Divisions committees reviewed numerous nominations from the public and NSC members to determine the honorees.

"I am very grateful for the person who nominated me, and I am grateful for the recognition that comes with the hard work, with being surrounded by other people who take great pride in their work," said Michael Ballard, deputy chief of Air Force occupational safety at the U.S. Air Force Safety Center on Kirtland Air Force Base in Albuquerque, NM.

"Together you're able to get things done for the benefits of the workers and workforce and workplace," Ballard said. "While I get to collect the award as an individual, it's really about the collective career successes of myself and many others."

Darryl Hill, senior vice president of safety at FirstGroup America in Cincinnati, considered being nominated for the award "an honor in itself." Hill recalled "a very uplifting call" from NSC President and CEO Lorraine M. Martin, who informed the recipients of the honor several weeks before Congress & Expo.

"To be recognized by NSC ... means a lot," Hill said. "It's certainly an honor for the recognition. Plus, I really believe in the focus and the aim of NSC."

Don Taylor, global health and safety and medical manager at Nexteer Automotive in Saginaw, MI, shared that sentiment. "When you look at your peers around the country, and you know a lot of different people and have worked with a lot of people and have trained a lot of people around the world, to be mentioned in that limelight and be part of that, it's a selective group that I'm very proud to be part of," Taylor said.

Doug Pontsler, chair and managing director of the Center of Visual Expertise in Toledo, OH, said he was especially humbled to earn the same award that two close colleagues have received in recent years.

Megan Tranter is the recipient of the 2019 Marion Martin Award, presented annually by the National Safety Council Women's Caucus. Tranter was presented the award Sept. 9 during the Opening Session of the NSC 2019 Congress & Expo.

Tranter, the global director of environment, health and safety at Amazon, said she had few colleagues after whom she could model herself when she graduated college.

"I began my career in safety when there were few female role models and safety professionals," she said. "When I completed my degree in 1993, I was one of eight graduates of Australia's first health and safety undergraduate program. I don't think many of us even realized what our careers could grow to be."

Tranter's career brought her to the United States and jobs with major corporations, where she has impacted the safety and health of millions of workers and their families.

Andrew Johnson is the new chair of the National Safety Council board of directors. Outgoing Chair Mark Vergnano passed the gavel to Johnson Sept. 9 during the Opening Session of the NSC 2019 Congress & Expo.

Taking over as vice chair of the board is Elaine Beitler, who also will serve as chair of the delegates. Beitler is CEO of Browz LLC, a global software developer and provider. Before joining Browz, she spent 13 years at Bowne & Co. Inc., a shareholder and marketing communication services company, where she was corporate officer, president of marketing and business communications, and chief information officer.

‘Making the impossible possible’ at the 2019 NSC Congress & Expo