We use cookies to provide you with a better experience. By continuing to browse the site you are agreeing to our use of cookies in accordance with our Privacy Policy.
Home » Be ready for earthquakes
Injury prevention

Have you had a workplace drill? One thing not to do during an earthquake? Run.

“There’s a high likelihood if it is a large earthquake, you can be thrown to the ground and be injured,” Blake said. “When people are running, they’re not reducing their potential for injury – they’re increasing it.”

Serne said the “drop, cover and hold on” strategy works well and, when the shaking stops, everyone should cautiously evacuate the building. “You want them to understand to immediately take shelter, but then they should go,” she said.

That’s what the workers at Greer’s facility did without incident. “Everyone knew what to do, so that was good,” he said. “If you’re not doing this (training) beforehand, you’ll run into a lot of problems.”

Part of that training should include preparing for aftershocks, which can be equally jolting for individuals who may have frayed nerves from the initial tremor. According to the University of Utah Seismograph Stations, more than 700 aftershocks were felt over the next two weeks after the Magna quake occurred. Of those, 34 had a magnitude of 3.0 or higher.

“We actually had more product damaged in the aftershocks than the initial shock in our warehouse,” Greer said.

Relatively speaking, earthquakes don’t last long, but they can have long-lasting effects. According to the Ready Business QuakeSmart Toolkit, citing 2014 data from FEMA and the Department of Labor, 40% of small businesses won’t immediately reopen after a natural disaster such as an earthquake. One year later, an estimated 25% more will close. 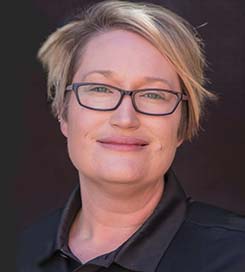 To better help employers understand the potential challenges they could face after an earthquake, Serne suggests conducting an annual tabletop exercise with key safety leaders and company executives. “Put some people in a room once a year and say, ‘We’ve had an earthquake and here’s what is happening to our facility.’ Run through some scenarios and see how you do,” she said. “That’s the way to test your emergency plan. That’s how you find the holes. You’d be surprised. There’s stuff that comes up that you hadn’t thought of.”

OSHA covers emergency action plans in its 1910.38 standard, which requires employers to designate and train workers to assist in safe evacuations, as well as review the plan with every employee who is covered by it.

To assist employers with risk assessment, the Department of Homeland Security’s Ready.gov website features a diagram detailing the three-step process. The first step is hazard identification, which involves determining the probability and magnitude of events such as a natural hazard, fire, pandemic or an explosion. Next is considering what assets are at risk: property, equipment, supply chains and, most importantly, people. Finally, safety leaders should conduct an impact analysis with a look at what could be lost in an event such as an earthquake, including lives.

Additionally, being prepared requires regular training to make sure the actions workers must take to keep themselves and others safe are top of mind. “We encourage people to do, at minimum, an annual earthquake drill, just like they would do for active shooter or tornado or fire,” Blake said.

In FEMA’s “Every Business Should Have a Plan” booklet, the agency recommends including emergency preparedness information in newsletters, on a company intranet, in periodic emails to workers, and/or in other internal communication tools. The agency adds that special considerations must be made for individuals with disabilities.

At Closure Systems International, Greer said the company’s commitment to preparation and having a disaster plan was an important factor in its ability to get the facility back up to full capacity within three days. (For a downloadable disaster plan template, go to Ready.gov.)

“Being able to respond to an emergency is great,” Serne said, “but being prepared for one is just so much better.”

After an earthquake: 7 hazards

An earthquake can shake workers’ nerves and create additional workplace hazards. Here are seven hazards employers and workers should be aware of after an earthquake:
Natural gas leaks: “If a building moves enough, a gas line could break,” said Jennifer Serne, an assistant professor in the safety and health management program at Central Washington University. “You should not try to do anything that would compound that issue, like making a spark.”
Blocked exits: They easily can be avoided by moving things away from the doors and exits before a quake occurs, according to Brian Blake, associate director of the Central U.S. Earthquake Consortium. “Don’t place the (vending) machine next to the door,” he said. “If you don’t want to secure it to the wall, then move it somewhere where it’s not going to crush somebody or block an exit.”
Hazardous chemicals: “Make sure that anything that could pose a hazard to an employee, have a plan for that,” Serne said. This is of particular concern when people are evacuating a building and could potentially encounter a chemical spill.
Fires: Workers should be trained on how to use a fire extinguisher, OSHA says on its Earthquake Preparedness and Response webpage.
Downed power lines: “Those things can and do frequently occur,” Blake said. Serne added that workers should be extra cautious when exiting a damaged building, looking out for electrical hazards.
Furniture: Heavy items such as bookcases tipping over is a common hazard. In addition, Serne said furniture (e.g., chairs with wheels) strewn around a building can be common after an earthquake. People exiting a building will have to avoid them.
Underground pipes: Just as gas leaks can occur, water and sewer line breaks are possible, Blake cautioned.

Get ready for the National Safety Stand-Down: Free resources available

Safety training materials may be too technical for some construction workers: CPWR