We use cookies to provide you with a better experience. By continuing to browse the site you are agreeing to our use of cookies in accordance with our Privacy Policy.
Home » You’re in charge of safety – now what?
Professional development Leadership

You’re in charge of safety – now what? 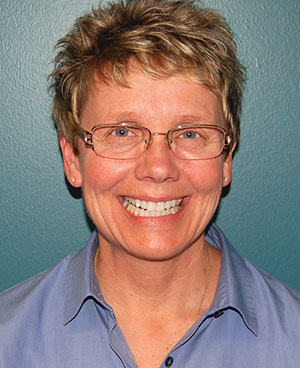 When it comes to regulatory bodies such as OSHA, JoAnn Dankert, senior safety consultant of workplace training at NSC, cautions that the agencies enforce “minimum compliance.” Additionally, their regulations don’t cover every hazard.

That means, in some situations, it may be wise to look to other consensus standards, such as those from the American National Standards Institute or the National Fire Protection Association. One key part in going beyond minimum compliance is continuous improvement, “the core of any safety management system,” Cannan said.

“Ask these two questions: Where is your organization now? Where are you going?” she said. One way to gauge that is by looking at your worker injury and illness logs. If these aren’t in place, estab-lish them immediately. (For more information, go to osha.gov/recordkeeping.)

“You have to know where to start pointing your actions,” Boroughf said.

From there, Smith recommends starting regular inspections and performing Job Safety Analyses – also known as a job hazard analysis or task hazard analysis – focusing on high-hazard areas first. Identify the hazards and conditions that might change, or try to anticipate new hazards.

Among his other advice:

With all of your new responsibilities, it’s easy to feel overwhelmed or even a little dispirited. When he first started out, Danny Smith sought help by getting employees involved in the safety process.

Your organization also should review its maintenance records, emergency and evacuation procedures, and medical and first aid treatment. Smith suggested placing a log, which workers should fill out, next to the first aid cabinet to help keep track of supplies and potentially provide other valuable information. 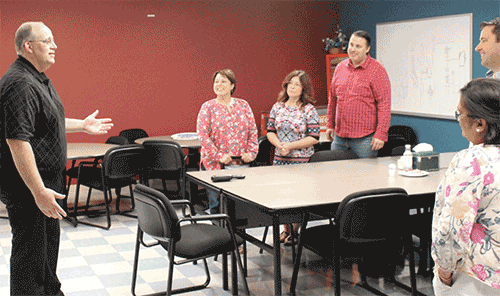 For example, say you notice that multiple employees who are working in the same area of the facility have needed adhesive bandages in a short period of time. This is a sign of a likely issue that needs examining.

“You have one person that nicks their finger on this piece of equipment today,” Smith said.

“Tomorrow, you have somebody else that does it. The third day, fourth day, a month from now, you get something. You can look at that log and you can gather that information.”

When seeking to prevent or mitigate hazards, use the Hierarchy of Controls. But go beyond personal protective equipment when you can, Smith advised.

“Don’t overthink things,” he said, “but also know hazard prevention and control is more than just putting up a sign.”

Some potentially new – and perhaps daunting – skills that new safety professionals may need to obtain involve public speaking or presenting. 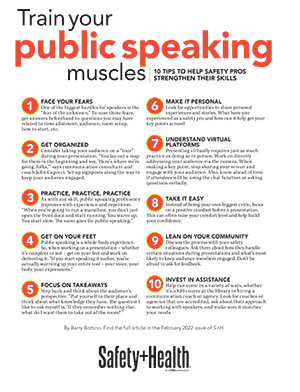 Communications consultant John Capecci provided speaking tips during the December episode of Safety+Health’s official podcast, “On the Safe Side.” Those tips are also detailed in “Train your pubic speaking muscles,” an article in the February issue of the magazine, complete with a downloadable tip sheet about shoring up your speaking skills.

Among Capecci’s advice: focus on takeaways, get organized and solicit help from others. Danny Smith, senior safety consultant at SafeStart, said his organization encourages people to videotape themselves as well. In terms of presentations, Smith said one tip is avoiding “death by PowerPoint,” such as reading directly off the slides.

Most of all, go easy on yourself as you learn.

“It is important to remember that we are our own worst critic,” Smith said.

Don’t be afraid to ask for help

With all of your new responsibilities, it’s easy to feel overwhelmed or even a little dispirited. When he first started out, Smith sought help by getting employees involved in the safety process, such as offering advice on policies and procedures.

“I’d ask the people who were doing the work to help me,” Smith said. “That made sure it didn’t just ‘look good on paper’ and would actually work and be used on the shop floor.”

He said he assigned workers from certain areas of a plant to perform self-inspections using the same checklist that he would use, or he’d let them fill out a portion of it.

A beneficial byproduct of this? Increased employee engagement. “In many cases, they were able to correct the issue without my involvement,” Smith said. “Educating folks on what was safe or at-risk in their work area and getting them involved in that process was a huge win.” 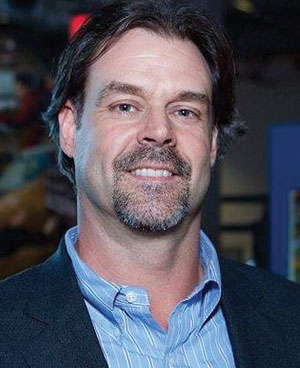 If possible, find a mentor – either within your organization or externally.

“Networking is a fundamental pillar in one’s safety career,” said David Consider, another senior safety consultant at NSC. “Get involved with global, national, and local safety associations and conferences.”

Angela Brown, senior manager for workplace practice at NSC, suggests using credible resources to “keep you from reinventing the wheel.” 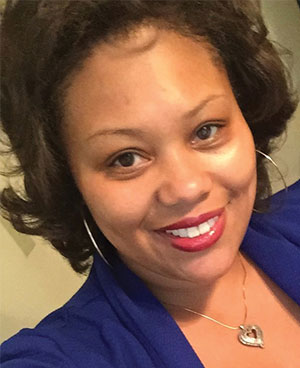 She continued: “Review the research on what’s already been done. The purpose and benefit of research is continuing to build on what already has been done. Reach out to other companies/organizations and establish working relationships with external partners that do similar work. Don’t be afraid to ask questions, or even to take a visit to see how things work within another organization.”

Boroughf’s suggestion is to stay organized, using a whiteboard or another method to write down your to-do list – with tentative and reasonable time frames.

“A very energetic person may come in and say, ‘Wow, I can do that in a month,’” she said. “But you’ve got to remember that there’s other roles and responsibilities and projects that may come your way. You may be delayed a week or two. It’s no shame to revise your timeline. You just have to show that you’re making progress.

“Stay focused and don’t get too many irons in the fire.”

As an example, she said don’t start a PPE assessment along with a lockout/tagout program and then something else. Instead, focus on your high priorities or “big hitters.”

In addition, look for “quick wins” to show early success and gain buy-in from your teams. That brings up another point. You can’t do everything by yourself, Smith said, especially if you have a multifaceted role. It’s vital to establish relationships.

“You have to have the support of lots and lots of people throughout the organization,” he said.