We use cookies to provide you with a better experience. By continuing to browse the site you are agreeing to our use of cookies in accordance with our Privacy Policy.
Home » 2014 State of Safety
Federal agencies Regulation State Plan states
OSHA'S ROLE Declining injuries, illnesses and fatalities have long been a trend in occupational safety and health. Occasional bumps in the road occur – on-the-job deaths increase slightly from one year to the next, or injury rates do not fall. But over the long-term, the result is clear: Workplaces are becoming safer.

The people and organizations responsible for this trend are a mixed group. Secretary of Labor Thomas Perez acknowledged as much in a statement following the release of Bureau of Labor Statistics preliminary data that showed fatal work injuries declined in 2012.

“It is a testament to the hard work of employers, unions, health and safety professionals, and the Labor Department’s Occupational Safety and Health Administration and Mine Safety and Health Administration,” he said in the statement, issued Aug. 22. “Through collaborative education and outreach efforts, and effective law enforcement, these numbers indicate that we are absolutely moving in the right direction.”

The current budgetary uncertainty is a big issue, according to Joe Van Houten, senior director of worldwide EHS at Johnson & Johnson in New Brunswick, NJ.

“It’s very difficult for an agency to plan a series of proactive, preventative activities when the funding for those activities could be discontinued at any time,” Van Houten said.

But do such activities have a substantial impact on workplace safety? OSHA was established more than 40 years ago, and the safety landscape has changed greatly since then. Can the agency continue to take partial credit for reductions in injuries and illnesses, and does it still have a major role to play? 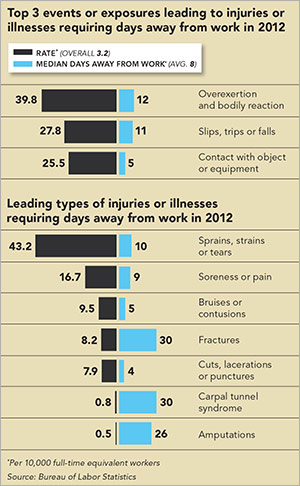 According to Van Houten, OSHA remains relevant. The agency, along with NIOSH, is one of the government leaders in occupational safety and health, he said.

Butch Tongate agreed. Tongate is the deputy secretary for the New Mexico Environment Department. Look at the statistics, he said, and you will see injuries and fatalities have been on a downward trend almost every year since OSHA’s inception. (See “The ongoing trend”)

“If OSHA wasn’t around, you would see those trends start going back up,” Tongate said.

A major reason for the downward trend, some stakeholders claim, is the enforcement side of OSHA as well as standards the agency sets to keep workers safe. Van Houten pointed to the Bloodborne Pathogens Standard and the Hazard Communication Standard as examples.

“These are things I’ve personally experienced come into existence,” he said of the two standards, which were first published in 1991 and 1994, respectively. “I know they certainly set the stage for really strong processes for preventing injuries in the workplace.”

Van Houten said standards in other areas, including foundries and construction, also have gone “a long way” toward protecting workers.

Since the 1980s and 1990s, however, the agency has issued fewer standards. Part of this is because the standards-setting process has become prolonged, Van Houten said, and part of it is because the “low-hanging fruit” has been picked.

As a result, OSHA’s role has evolved, he said – the agency now can focus its resources on egregious violators and emerging issues.

OSHA has shifted from a pure enforcement role to one that includes compliance assistance, according to John Newquist, an Illinois-based consultant and former OSHA assistant regional administrator. 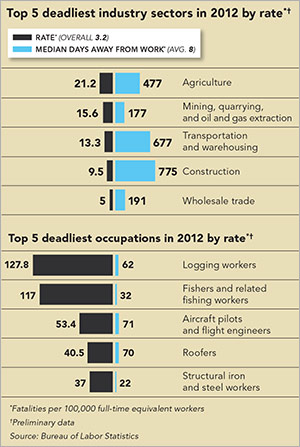 Thirty years ago, employers were not provided with education, Newquist said. Instead, they were given citations and had to figure out how to comply. Now, OSHA provides employers with ideas on how to correct hazards. “I think that’s a very positive role, and that didn’t exist in 1983,” Newquist said. “That kind of interchange and information is important.”

Interacting with employers and collaborating with them and the business community is a crucial part of what OSHA does, said Amanda Wood, director of labor and employment policy at the Washington-based National Association of Manufacturers.

“Our No. 1 priority is to have a safe and healthy workplace, and I think the government’s and OSHA’s role for that is to work collaboratively with businesses,” Wood said. However, she claims OSHA is straying from that role, as evidenced by the issuance of what she called “unnecessary rules and regulations.”

When OSHA fulfills its role of working collaboratively with employers and industries, it helps ensure employers are not faced with an undue burden in complying with new standards and furthers the goal of worker safety, said Matthew Lavoie, a National Association of Manufacturers spokesperson.

“OSHA has played a very important role in worker safety, but it’s important to note their successes come alongside businesses’, manufacturers’ efforts – not overriding them,” Lavoie said.