Why are workplace injuries and deaths increasing among Latino employees?

Juan Carlos Reyes was 35 years old when he died.

Reyes was working four stories above ground at a hotel construction site in Texas when his work platform became unstable. He fell to the ground and was later pronounced dead at the scene.

OSHA cited Reyes’ employer for several violations, including failure to ensure the scaffolding was erected by a qualified person and failure to provide a fall arrest system.

Reyes’ story is detailed in an April report from the National Council for Occupational Safety and Health, which claims the father of three might still be alive had he been protected by a fall prevention program that included safety harnesses and proper training.

“It’s not an accident,” the report states. “When employers provide a proper fall protection program, workers can eliminate falls, or reduce the chance of fatal impact if they occur. Reyes had no such chance.”

Fatalities among Latino workers are increasing. And by 2050 about one-third of the U.S. workforce is expected to be Latino – prompting stakeholders to urge for better protections for these workers.

The scope of the problem

Although this number is the second lowest on record, Latino and Hispanic workers experienced an increase in both the number of on-the-job deaths (817 from 748 in 2012) and fatality rate (3.9 from 3.7) – the only demographic group to do so.

This isn’t a merely a one-year bump in the numbers. Since 2010, the number of Hispanic and Latino worker deaths has steadily increased. And while the rate of death for this population fell in the early 2000s and has remained relatively constant in recent years, that stability stands in contrast to the downward trend among whites, blacks and Asians. 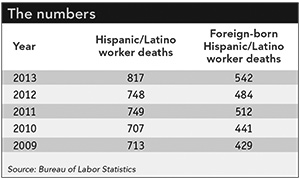 BLS data on nonfatal incidents shows that Hispanics and Latinos experienced 12 percent of all injuries or illnesses requiring days away from work in 2013 while making up 16 percent of the workforce. However, these figures include only reported injuries.

According to Jessica Martinez, deputy director of National COSH, many Latinos are part of an informal workforce. Martinez said these workers often have no setting for providing documentation or lack safe and consistent employment – part of an “underground” economy in which workers are paid in cash and stay off the books. Injuries suffered by these workers often go uncounted, she said, resulting in low injury figures.

As the economy recovers, the Latino segment of the workforce has returned to pre-recession employment levels, with particularly strong gains in construction, according to Catherine Singley Harvey. Singley Harvey is manager of the economic policy project at the National Council of La Raza, a Hispanic civil rights and advocacy organization based in Washington.

Employment in industries such as construction or agriculture – some of the most dangerous for workers – is one of the primary contributors to Latino workers’ higher fatality figures. But dangerous jobs don’t tell the whole story. When compared with other ethnicities, Latinos have a higher injury and illness rate within those high-hazard industries. “The Latino workers we know are definitely in a more vulnerable position in comparison to others,” Martinez said.

And Singley Harvey points out that even if the total number of fatalities increased due to growing employment, one would expect the rate to stay the same – yet for Latino workers that hasn’t been the case.

She suggests that the recession could have played another role in increasing injuries: Perhaps employers, in their haste to get projects up and running again, weren’t as diligent in instructing workers on safety and health procedures. She said that when President Barack Obama first took office, his administration was focused on worker safety and health, but the narrative changed to a focus on job growth and job quality. The Department of Labor, which wanted to see the economy moving again, may have let its guard down in terms of enforcing workplace safety requirements, Singley Harvey said.

In addition to dangerous jobs, other systemic issues such as immigration status and language barriers may be driving high injury rates, according to Martinez. She alleged that a few employers may even “shamelessly” violate workers’ rights because the workers fear retaliation.

This can be manifested by inappropriate or ineffective training: The training may not have any intent to instruct workers on safety procedures or policies, but workers will still be told to sign a sheet saying they’ve been properly trained. If they don’t sign, they lose their job, Martinez said.

Some workers are afraid to speak up over unsafe conditions due to their uncertain immigration or job status, or because of a general lack of knowledge regarding their rights, Singley Harvey claims. All of these issues may make workers fearful of being fired – and losing the ability to support their family – so they stay quiet. The result is an increased likelihood of on-the-job injuries.

Culture and communication play a vital role in the safety of Latino workers. For example, when workers don’t understand the language in which instructions are given – or do not understand it well – safety is affected, according to Jose Perez. “If the language barrier is not addressed properly, this at times carries consequences in regards to safety,” said Perez, who is based in California as the corporate safety manager for The Wonderful Company (a health-product manufacturer) and is the chair of the American Society of Safety Engineers’ Safety Professionals and the Latino Workforce group.

Perez immigrated to the United States when he was 19 years old. His first two years in the country were spent working as a farm laborer and then in construction. Since then, he has had a career in safety, concentrating on improving the safety culture among the workforce. His duties include improving communication between employees and supervisors and bridging culture gaps.

To Perez, an individual’s culture plays a key role in decision-making. Among workers in some Hispanic cultures, reporting injuries or safety hazards to a supervisor can be considered inappropriate or an inconvenience.

“This is not something that employers express, but more the manner of how we are brought up within our Hispanic culture,” Perez said. “We are ingrained with the fact that we should not miss work if we become injured; we should take care of it and continue to work.”

Some stakeholders believe the first and most important step in reducing injuries and deaths among Latino workers is immigration reform. More than half of Latino workers killed on the job were foreign-born, and providing a legal status to undocumented workers would give them protection to speak up about workplace hazards, they claim.

“Allowing workers to have an immigration status that allows them to feel that they have rights here, it would allow workers to come out of the shadows and feel more encouraged to exercise their rights,” Martinez said.

Without this reform and subsequent protection, employers can use the threat of deportation to prevent workers from exercising their rights to a safe work environment, according to Martinez.

Martinez stressed that not all employers are like this – some actively try to create a safe workplace for employees, including Latinos. But other employers may interpret the law in such a way that favors the employer instead of the worker, or choose not to follow the law or are simply unaware of it.

Education is one of the strongest tools to confront the issue and trend of increasing injuries and fatalities among Latino workers, according to Martinez. Advocacy groups, including National COSH, work to make employees and employers aware of the workplace health and safety protections employers are legally required to provide.

Workers need to know who their employer is – not simply who their supervisor is, but the person who signs the paycheck, Martinez said. They need to know OSHA exists to protect workers, and that the agency’s duty is unaffected by a worker’s immigration status.

However, OSHA is too small to realistically inspect every workplace to ensure employers are taking steps to keep workers safe. Singley Harvey characterized OSHA as “hamstrung by resource shortages.” Although employers are responsible for ensuring a safe work environment, it’s OSHA’s job to make sure employers are fulfilling their end of the bargain. This becomes harder after years of budget cuts, Singley Harvey said.

Workplace fatalities in general have decreased since the enactment of the Occupational Safety and Health Act in 1970, Martinez said, and that’s due to safety laws and an agency enforcing them. A stronger OSHA, with more inspectors and updated standards, could improve safety for all workers.

Perez reiterated the importance of keeping culture in mind to help protect Latino workers. “When an employee understands that reporting an injury or an unsafe condition is not only acceptable but also welcomed, we begin to break down these barriers,” Perez said.