UPDATE: After the April issue of Safety+Health went to the printer, National Dog Bite Prevention Week was postponed because of the COVID-19 pandemic. It has been rescheduled for June 14-20.

Snow, rain, heat or “gloom of night” won’t stop its letter carriers from the “swift completion of their appointed rounds,” declares to the unofficial motto of the U.S. Postal Service.

Dogs, on the other hand, pose a more common threat to postal workers’ ability to safely carry out their job.

For Linda DeCarlo, manager of safety and OSHA compliance programs at USPS, dog attacks are an everyday safety concern that her co-workers need to be constantly aware of and prepared for – no matter the size of the dogs they encounter.

“Our message is: If it’s got teeth, it can bite,” DeCarlo said. “You have to look at it from the dog’s perspective. He’s doing his job. He’s protecting that house and protecting his family, and all of a sudden a stranger is knocking on his door.”

Dog attacks and bites aren’t solely a USPS concern. Outdoor workers, delivery drivers, home maintenance workers and others who visit customers’ homes also are at risk. According to the American Veterinary Medical Association, nearly 48.3 million households owned at least one dog in 2018 – up from more than 43.3 million in 2012. Among private-industry employees, nonfatal workplace injuries and illnesses involving dogs nearly doubled to 6,230 in 2018 from 3,380 in 2011, National Safety Council data shows.

“It’s a big issue, and it’s a growing issue,” said Darryl Daves, senior manager of utility operations safety at Entergy Corp., an energy company with utility workers in Arkansas, Louisiana, Mississippi and Texas. “At times, it seems like an unsolvable problem.”

So, how can employers reduce this risk for their workers?

Awareness for all workers

USPS recorded around 5,700 dog attacks or bites last year, DeCarlo said, adding that she doesn’t want her carriers to fear dogs. Rather, carriers should “be prepared and be aware.”

“Just pay attention to what you’re doing and where you are,” she said. “The same applies if you’re crossing the street. You can’t be wearing headphones or texting on your cellphone while trying to cross the street and expect not to get hit.”

For landscaping workers, Drew Garcia, chair of the National Association of Landscape Professionals’ Safety and Risk Management Committee, recommends performing a job hazard analysis at each location before beginning work.

“The likelihood of a dog being there is probable,” he said. “You look at the exposures that would come with that worksite. Dogs would be one of those, and you’d want to address that with the homeowner. ‘Where’s the dog going to be while I’m here?’ Maybe you ask, ‘What’s the dog’s name?’ If any of that looks different or the dog is in a different place, that would be a cause for caution. Then, adjust your plan.”

The issue came to the forefront at Entergy last year when several workers were bitten by dogs over the course of a few months. In response, Daves encourages his team to be alert for telltale signs of a dog on a worksite, such as tracks, a doghouse or posted signage warning visitors of a dog on the property.

“You’ve got to be keenly aware of a dog that could come out from anywhere and bite,” he said.

“The driver that’s most likely to get bit is the inexperienced driver,” Bradon said.

Experienced drivers share best practices to keep colleagues safe, often with a twist. Along with presentations from workers who have been bitten, some committee members have donned a dog costume as drivers arrive for their workday. The committees also have brought in a dog during training.

“Everybody loves dogs but also recognizes that dogs can be a risk,” Bradon said.

Daves said finding solutions can be a challenge because each home that workers visit is different.

The one constant, according to Daves and others, is repeating safety messages to workers. 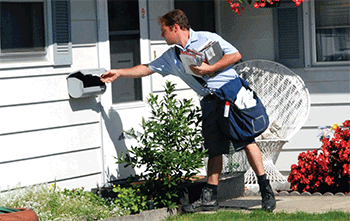 About 5,700 letter carriers were bitten or attacked by dogs last year, according to Linda DeCarlo, manager of safety and OSHA compliance programs at the U.S. Postal Service. To help reduce those numbers, the agency is partnering with the American Veterinary Medical Association on National Dog Bite Prevention Week.

“The intent is full awareness,” DeCarlo said about the annual event, scheduled for April 12-18. “It’s awareness for our employees, our customers and the public. We want to start bringing people closer in on the conversation.”

To do so, USPS workers will share resources with the public and visit schools to spread the safety message.

“When you start having those one-on-one conversations, it makes a lot of difference,” DeCarlo said. “I think the kids are the ones that pay the most attention to us.”

Discussions with the public also focus on the responsibility of dog owners to help keep workers safe, because a dog bite doesn’t affect just the injured worker.

“As a pet owner, you run the risk of losing your dog,” DeCarlo said. “Your homeowner’s insurance is going up if your dog bites somebody. You also run the risk of us stopping delivery of mail because it’s not safe for our employees to be on your property.”

To learn more about preventing dog bites, watch a video from USPS:

USPS workers learn early in their training to use their satchels as a barrier between them and an aggressive dog as a means to protect themselves from bites. They also are supplied with dog spray.

Entergy’s outdoor workers, Daves says, carry dog spray and a stick with a tennis ball attached as deterrents. The ball and stick give a dog something to bite and keep the animal at bay. Daves said an umbrella also can be an effective defensive tool.

For landscapers, Garcia said that he tells workers a jacket or other item of clothing can be used to help distract an aggressive dog.

USPS letter carriers, UPS drivers and Entergy meter readers often carry small, handheld computers. Some of them rely on the devices to share messages about certain homes with animals. These also can be used as barriers against a dog bite.

“An iPad is replaceable,” Daves said. “A dog bite takes longer to get over.”