We use cookies to provide you with a better experience. By continuing to browse the site you are agreeing to our use of cookies in accordance with our Privacy Policy.
Home » Alabama ammonia incident prompts CSB safety bulletin
Workplace exposures
VALUABLE LESSONS 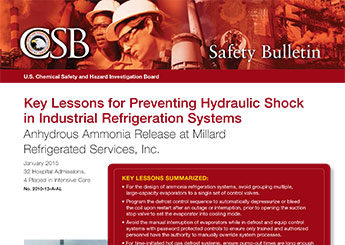 CSB officials issued a safety bulletin to highlight lessons learned from the incident at Millard Refrigerated Services in Theodore, AL. The event resulted in the release of more than 32,000 pounds of anhydrous ammonia. Thirty-two offsite workers were hospitalized, including four who required intensive care.

During the conference call, CSB investigator Lucy Tyler said that on the day before the incident, Millard’s facility experienced a loss of power that lasted more than seven hours. When an operator reset the control system the next day, the freezer evaporator switched into refrigeration mode while hot, high-pressure gas remained in the evaporator coil.

Tyler said companies can avoid similar breakdowns by focusing on the design and operation of their refrigeration systems, as well as by taking proper action in the event of an ammonia release.

“The CSB believes that if companies in the ammonia refrigeration industry follow the key lessons from its investigation into the accident at Millard Refrigerated Services, dangerous hydraulic shock events can be avoided – preventing injuries, environmental damage, and potential fatalities,” CSB Chairman Rafael Moure-Eraso said in a press release.