We use cookies to provide you with a better experience. By continuing to browse the site you are agreeing to our use of cookies in accordance with our Privacy Policy.
Home » OSHA highlights 2 fatal events, offers tips on avoiding future incidents
Temporary workers Agriculture, forestry and fishing 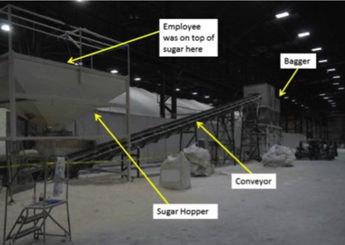 One document describes how two 14-year-old temporary farmworkers died after they were electrocuted when one touched an electrified metal irrigation structure, and the other tried to move the worker from the structure. Lightning hit the irrigation system and melted the electrical wires’ insulation before the incident. The system was still connected to a power source, so electricity could travel from the damaged conductors to the structure.

OSHA determined that the system was “not effectively bonded or grounded” before the lightning strike. Among its recommendations, the agency encourages training workers about electrical hazards.

The second document outlines how a temporary worker suffocated after he fell into a sugar hopper. The worker was using a pole to break up sugar clumps when the sugar bridge on which he was standing collapsed. Workers received no appropriate safety training, among other issues, OSHA stated. Employers and temp agencies should train all workers and make sure proper safety measures are taken before work starts, the agency concluded.

Both documents are additions to the Fatal Facts series.