We use cookies to provide you with a better experience. By continuing to browse the site you are agreeing to our use of cookies in accordance with our Privacy Policy.
Home » Leadership Keynote: Speaker focuses on being ‘safe 4 the right reasons’
Show Daily Leadership

Leadership Keynote: Speaker focuses on being ‘safe 4 the right reasons’ 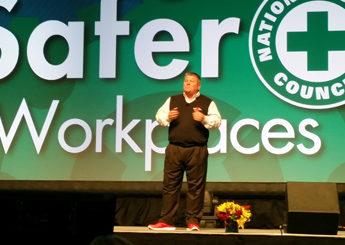 During the Leadership Keynote Sept. 30 at the NSC Congress & Expo, Lesinski, vice president of DiVal Safety Equipment, asked audience members to close their eyes and think of four people who depend on them to work safely.

He asked how many included themselves. Few did. We must strive for safety for ourselves as well as for others, he emphasized.

Lesinski’s message has made an impact on his own life. He recalled how his wife of 26 years held up her four fingers while he was driving one day. It worked – Lesinski drove more slowly and cautiously. The message also can be effective at work.

“Nothing is more important than getting home to your kitchen table tonight,” he said.

Lesinski posed another question to the audience: Is acting safe a natural human behavior? Some answered yes. But Lesinski said it is not. We want to get a job done quickly; we think we know what we’re doing, he said. Or we think nothing bad will happen. We skip steps.

Attitude makes a difference, and we should remember the four who depend on us to be safe, Lesinski said.

“[Safety] profoundly and permanently affects their lives,” he said.

On the Safe Side podcast Episode 4: National Safety Month

Safety Leadership: A leader’s role in fostering well-being on the front line