We use cookies to provide you with a better experience. By continuing to browse the site you are agreeing to our use of cookies in accordance with our Privacy Policy.
Home » MSHA’s Main cautions against budget cuts, calls for additional ‘tools’
Federal agencies Legislation Fines/penalties Mining, oil and gas 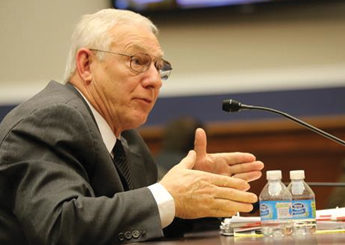 Photo: U.S. House Committee on Education and the Workforce

Washington – Five years after the tragedy at Upper Big Branch mine in West Virginia killed 29 workers, the Mine Safety and Health Administration has made strides to prevent similar incidents but still needs more tools, MSHA chief Joseph A. Main said during an April 23 hearing.

Speaking before the House Workforce Protections Subcommittee, Main warned against agency budget cuts. Previous budget reductions or stagnations resulted in less-experienced staff at the agency, he said. Stating that it takes about two years to train a mine inspector, Main stressed the importance of a “forward-looking” budget to ensure the agency has staff at the appropriate levels and experience.

For fiscal year 2016, which begins Oct. 1, MSHA is requesting a budget of $394.9 million – a $19 million boost from FY 2015. When asked what tools – other than being granted subpoena power – would be the most helpful, Main addressed the issue of mine owners who do not pay their penalties. Currently, the agency does not have adequate means to go after these scofflaws, he said.

A day before the hearing, Rep. Bobby Scott (D-VA) reintroduced the Robert C. Byrd Mine Safety Protection Act (H.R. 1926), which would provide MSHA with subpoena authority, more tools to collect delinquent fines and additional deterrents for mine violators.