We use cookies to provide you with a better experience. By continuing to browse the site you are agreeing to our use of cookies in accordance with our Privacy Policy.
Home » Oregon high school student creates winning video on worker safety
Resources State Plan states Video 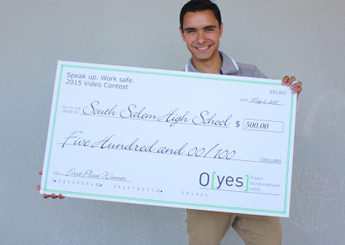 Salem, OR – Lorenzo was a typical young adult struggling to find a job. When he did find employment, he faced a hazardous environment and threats from his boss to work faster or be fired.

The contest challenged high school students to submit videos promoting safety awareness among young workers, and encouraging those workers to “Speak up. Work safe.” Patterson’s entry was selected from a pool of 11 finalists, according to a May 2 press release from Oregon OSHA, which co-sponsored the contest. Patterson and his school – South Salem High School – both won $500.

“My grandpa died from asbestos and he worked in a factory when he was really young,” Patterson said in the release. “I thought that making this video would help people who should have a voice and encourage young people to speak up.”

In 2013, 71 workers younger than 20 suffered a fatal workplace injury, according to the Bureau of Labor Statistics.