We use cookies to provide you with a better experience. By continuing to browse the site you are agreeing to our use of cookies in accordance with our Privacy Policy.
Home » Dangerous beauty: Salon worker health is in the spotlight
Workplace exposures
STRONGER PROTECTIONS NEEDED

Dangerous beauty: Salon worker health is in the spotlight All of these are potential health problems faced by workers in nail salons.

A two-part New York Times investigation published in May reported that nail-salon workers can be exposed to harmful chemicals and suffer a wide range of ailments. The articles chronicled tales of lung disease, breast cancer and even vanishing fingerprints.

In response, New York lawmakers introduced legislation to shut down salons that operate unlawfully, and Gov. Andrew Cuomo (D) created a task force to improve industry conditions. Additionally, Sens. Richard Blumenthal (D-CT) and Charles Schumer (D-NY) called for stronger protections from OSHA. The agency has provided additional materials, including a wallet card and flyer, to inform salon workers about their rights to a safe workplace and fair pay.

Safety advocates are encouraged by the increased awareness but want better safeguards for salon workers. Although manicurists are considered particularly vulnerable, workers in both nail and hair salons can be exposed to hazardous chemicals.

“We’ve talked to hundreds of owners and workers. The stories you hear make you wonder,” said Thu Quach, research scientist at the Cancer Prevention Institute of California in Fremont. “They’re saying, ‘I don’t have a family history of cancer’ or ‘I know this worker who miscarried.’ The stories sound so similar again and again. They’re hard to ignore.”

Research about the cosmetology industry (which includes manicurists and hairstylists) and its effects on worker health has been limited.

The Times investigation noted that studies have concluded cosmetologists have higher rates of the cancer multiple myeloma, low-birth-weight babies and death from Hodgkin’s disease.

A report released in November 2014 by Women’s Voices for the Earth, a Missoula, MT-based environmental health advocacy group, found that salon workers often are exposed to products containing harmful chemicals that are linked to conditions such as cancer, reproductive problems and asthma. According to some studies, more than 60 percent of workers say they have skin conditions such as dermatitis, and a survey of cosmetologists in Colorado found that 9 percent had doctor-diagnosed asthma, and that hair and nail work heightened the risk of an asthma diagnosis. A study of nail-salon workers in Boston revealed that 44 percent experienced headaches that diminished after they left work, and 28 percent felt light-headed or had difficulty concentrating at work.

“The personal care folks say these products are fine for consumers, which may well be true, but they don’t calculate long exposures to the chemistry,” said Ann Blake, an environmental and public health consultant who contributed to the Women’s Voices for the Earth report.

Read Women’s Voices for the Earth's “Beauty and its Beast” report.

OSHA’s website has a page listing hazardous chemicals found in salon products and their potential adverse health effects, such as breathing problems and nausea. And NIOSH warns that nail-salon workers can be exposed to various chemicals, including solvents, biocides, and acrylates in vapor or dust.

A major concern regarding both hair and nail products is formaldehyde. In 2010, Oregon OSHA tested more than 100 hair product samples from more than 50 salons and found “significant levels” of formaldehyde in products labeled as free of the chemical. The state agency discovered that 37 samples of Brazilian Blowout hair-straightening solution, which had been labeled as formaldehyde-free, averaged 8.68 percent of formaldehyde content. Several other brands contained more than 0.1 percent, which is the level at which OSHA requires employers to label solutions as containing formaldehyde.

Oregon OSHA also found through air monitoring that worker exposure to formaldehyde ranged from 0.006 parts per million to 0.331 ppm (below the OSHA permissible exposure limit of 0.75 but in most cases higher than stricter limits recommended by other organizations) – and that multiple treatments increase exposure. Short-term exposures ranged from 0.108 to 1.88 ppm; the limit is 2.0.

“They were higher exposures than anyone would normally expect to encounter,” Oregon OSHA administrator Michael Wood said. “The amount of formaldehyde in [one] product was greater than you would typically see in formalin solution used for chemistry or embalming purposes. The airborne exposures were comparable to what we’d see in embalming. The critical thing for us was to try to get more accurate information out into the marketplace.”

Both federal and Oregon OSHA have released hazard alerts about potential formaldehyde exposure from hair-smoothing products. Oregon OSHA notes that OSHA’s exposure limit for formaldehyde is less protective than that of NIOSH and the American Conference of Governmental Industrial Hygienists.

“Formaldehyde is certainly one of the chemicals where it appears a serious look should be taken at reducing the PEL to better reflect current science and toxicology, but that’s not unique to formaldehyde,” Wood said. “PELs enforced by federal OSHA, many are out of date. If we come up with a strategy to update those, it is one of those I would expect to see changed – probably not moved to NIOSH-recommended levels, which are very low. ACGIH-recommended levels are realistic.”

OSHA also notes that some chemicals listed on salon product labels either are alternative names for formaldehyde or are treated as formaldehyde under OSHA’s standard for the chemical. They include:

Still others, such as timonacic acid, can release formaldehyde under certain conditions.

Safety advocates want safer products and stronger regulations. Yet the Food and Drug Administration states that it doesn’t have legal authority to approve cosmetics and their ingredients – except for color additives – before they hit the shelves. Manufacturers are not required to provide their products’ safety information to FDA. However, the agency notes it “can take action against a cosmetic on the market if we have reliable information showing that it is adulterated or misbranded.”

“New formulations are coming out daily, and we don’t know what those are,” Blake said. “The easiest thing is to have a disclosure requirement for the industry. Theoretically, there is one under the Food, Drug, and Cosmetic Act, but it’s not really all that clear or strongly enforced.”

The Professional Beauty Association, a Scottsdale, AZ-based organization representing salon professionals, said in a statement that it “actively works with leading manufacturers to ensure products are safe for use and improve working conditions in salons across the U.S.”

“Sometimes, salons are resistant to [PPE] because they don’t want to make customers nervous,” Wood said. “The chemical risks are real. There is a risk, though typically much lower for customers.” Workers can help themselves by asking questions, using gloves and not assuming a product is safe because no one has said it’s dangerous, Wood said.

“Probably the most important advice is to ask questions and push a bit with employers,” Wood said. “[Ask] ‘What exactly is in this product we’re supposed to be using? Where are the Safety Data Sheets? What does it say we should be doing?’ In most cases, turning to data sheets will warn workers and employers alike about the genuine risks present.”

Language barriers may prevent some workers from reading product warnings and labels, which has prompted OSHA to translate its resources into Spanish, Vietnamese, Korean and Nepali.

A flyer and a wallet card released by OSHA in June provide guidance for protecting nail workers:

In New York, change is happening. The task force established by Gov. Cuomo is expected to implement several actions, including regulations that require nail salons to provide workers with appropriate PPE and post notices about worker rights in several languages, as well as install each workstation with a fan.

“It’s great there’s this quick response,” Quach said. “I’m a little concerned these are quick fixes to problems that are much more complex. The best way to minimize exposure is to not bring it into the workplace. That’s why we believe [in] starting with safer products.”

Results of Quach’s pilot study, published in 2012 in the American Journal of Industrial Medicine, indicated increases in knowledge about chemicals and glove and mask use, as well as fewer nose, skin and throat irritations and less methyl methacrylate and total volatile organic compounds in the air.

“It’s been great,” Quach said. “Workers and owners want to make the change. Who doesn’t want to have a healthier workplace?” 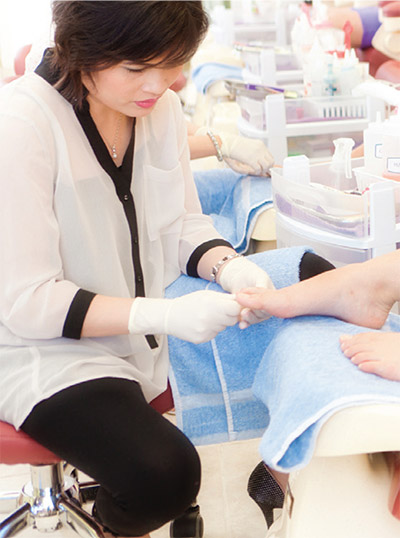 Speaker Spotlight: Defend your safety training: Is it good enough?