We use cookies to provide you with a better experience. By continuing to browse the site you are agreeing to our use of cookies in accordance with our Privacy Policy.
Home » Annual truck and bus inspection campaign yields record-low violation rates
Bus/limo/taxi Trucking 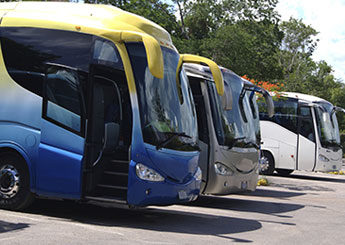 Greenbelt, MD – The Commercial Vehicle Safety Alliance’s International Roadcheck 2015 concluded with the lowest rates of violations since 1991, according to the organization.

International Roadcheck is an annual 72-hour enforcement and safety outreach event, during which inspectors across North America check braking systems, lights, tires and other items on commercial motor vehicles. Each year, the event focuses on a certain category of violations; in 2015 it emphasized cargo securement.

Of the 44,989 North American Standard Level I Inspections conducted on CMVs June 2-4, 3.6 percent of drivers and 21.6 percent of vehicles had out-of-service violations – the lowest rates ever recorded by CVSA. Among the 69,472 total inspections of trucks and buses, 777 safety belt violations were issued.

Level I inspections are the most thorough and involve 37 steps that examine the vehicle’s safety and the driver’s record of duty status, according to CVSA.

CVSA estimates that the more than 1.4 million inspections through International Roadcheck have saved 334 lives and prevented 6,134 injuries since the program began.