We use cookies to provide you with a better experience. By continuing to browse the site you are agreeing to our use of cookies in accordance with our Privacy Policy.
Home » Hearing protection for arc flash hazards
Workplace Solutions Hearing protection

What hearing protection is most appropriate for arc flash hazard areas? 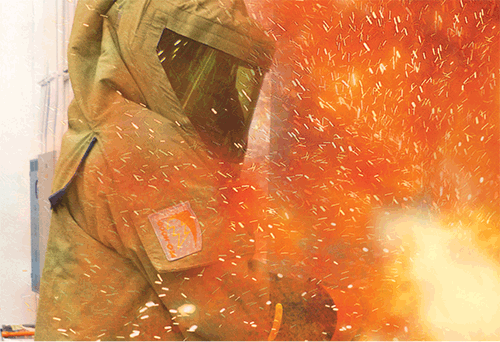 Each year, more than 2,000 people are treated for burns and injuries from electrical arc flashes (NFPA 70E-2015, Annex K). “Arc flash” is the term describing an extremely volatile electrical hazard in which an uncontrolled current passes between two conductors. When voltage is high enough (possible above 300V, but usually around 480V), the intense heat of the arc flash can create a serious hazard for workers in the arc flash zone. Temperatures can reach 35,000° F, and the impulse sound resulting from the explosive expansion from the arc can exceed 160 dB – far above levels capable of instantaneous permanent damage to hearing.

The National Fire Protection Association’s 2015 edition of its 70E standard for electrical safety in the workplace defines arc flash boundary zones and recommended personal protective equipment for each zone. This 2015 standard requires workers in an arc flash hazard zone to wear insert-type hearing protection (earplugs). NFPA does not certify or approve any PPE, so any claims from manufacturers stating that a particular piece of PPE has been tested to NFPA standards, or has been certified by NFPA, are inaccurate and misleading.

The purpose of the earplug is to provide hearing protection only – not to provide any burn protection. That would be provided by a head covering.

Earmuffs are considered inappropriate protection for arc flash hazard zones. Earmuffs are more likely to contain conductive metal, either in the earcup or the headband, which would exacerbate the arc flash injuries.

Also, their performance in impact noise can be erratic, with earmuffs often lifting off the face with the pressure wave of the impact, thus reducing effective protection. The end result is compromised protection when wearing an earmuff alone in an acoustic blast. The ideal hearing protector in an arc flash would be earplugs worn under protective arc-rated headwear. An earmuff could potentially interfere with that other clothing.

If properly inserted and well-fitted, an earplug may provide good protection for an explosive blast. Whereas OSHA defines 90 dBA as the permissible exposure limit for an 8-hour time-weighted average noise exposure, many jurisdictions require impulse noise to be reduced below 140 dB for a single-event exposure (explosion or blast). A well-fit earplug would typically provide protection down to this level of protection in an arc blast.