We use cookies to provide you with a better experience. By continuing to browse the site you are agreeing to our use of cookies in accordance with our Privacy Policy.
Home » Memorial to honor Triangle Shirtwaist fire victims 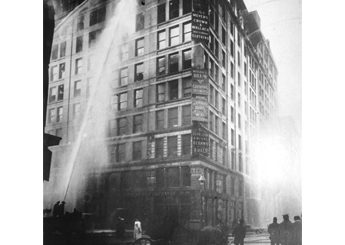 Albany, NY – Steps from New York’s iconic Washington Square Park in Greenwich Village rests the site of one of the most horrific worker tragedies in U.S. history.

Soon, an elaborate memorial at the site will honor the 146 workers who died in the Triangle Shirtwaist Factory fire on March 25, 1911. The state of New York will contribute $1.5 million toward the project, which is led by the Remember the Triangle Fire Coalition.

The tragedy “forever changed government’s role in protecting working men and women,” according to a press release from the New York State Department of Labor. Although the worksite’s hazards were no secret before the blaze, management refused to install sprinklers and designed the factory with profits – not safety – in mind, the release states. Many of the building’s fire escapes were defective, and most of the workers killed were teen girls who were trapped on the top three floors of the 10-story building.

The building remains standing and now is used by New York University for biology and chemistry laboratories. The memorial will include steel panels that wrap around the building, as well as upper and lower panels that will list the names of the victims and tell the story of the fire. A reflective steel beam will extend from the corner of the building to the eighth floor, which is where the fire originated.

“The Triangle Shirtwaist Fire galvanized the labor movement in America and should never be forgotten,” New York Gov. Andrew M. Cuomo (D) said in a press release. “New York State has always been a beacon for progressive government policies and while we honor the victims’ legacy with this memorial, we must continue to improve workplace protections to ensure tragedies like this one are never repeated.”