We use cookies to provide you with a better experience. By continuing to browse the site you are agreeing to our use of cookies in accordance with our Privacy Policy.
Home » Hearing conservation: Listen up
Hearing conservation Personal protective equipment Construction
HEARING LOSS PREVENTION 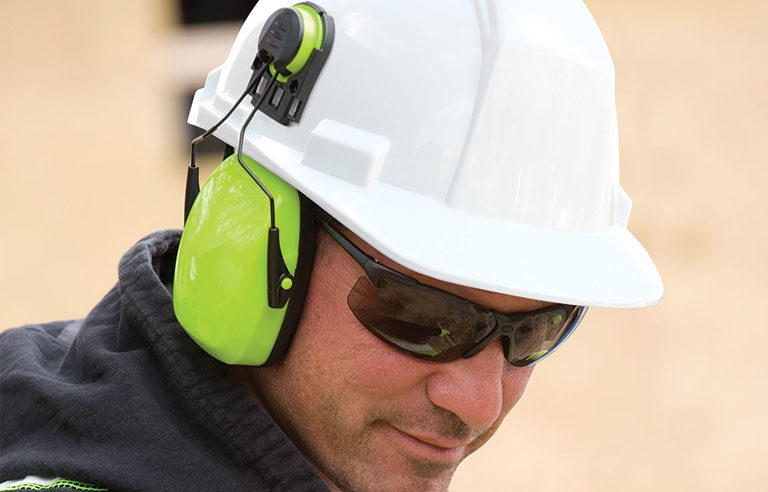 UPDATE: This article was updated on March 10 to clarify that OSHA’s Occupational Noise Exposure Standard sets a permissible exposure limit of 90 dBA for an eight-hour period, and that for every 5 dBA increase, workers should cut their maximum exposure time in half. The original article stated OSHA set a boundary of 85 dBA, and that workers are advised to cut maximum exposure time in half for every 3 dBA increase. The 3 dBA increase is a NIOSH recommendation – not part of the OSHA standard.

Imagine a massive rock – bigger than a house. Now, imagine being part of a work crew that has to blast that rock out of the ground and into countless pieces of tiny, crushed rock. Imagine the noise.

Although noise exists, so do solutions. At Vulcan, Bailey has helped the organization garner national recognition for its efforts to prevent occupational hearing loss. As the company’s director of safety, health and environment, Bailey traveled to St. Petersburg, FL, in 2013 to accept the NIOSH Safe-In-Sound Excellence in Hearing Loss Prevention Award.

Bailey’s message to fellow safety professionals is simple: By taking steps to protect your workers from hearing loss, you make your organization safer, stronger and more satisfied.

“Noise is certainly a hazard that you want to have under control,” said Bailey, whose organization employs about 7,000 workers in 19 states, the District of Columbia, the Bahamas and Mexico. “That’s why the exposure monitoring program is so important. You need an army to address it. We try to get as many levels of our employment involved in the monitoring aspect and the controlling aspect.”

According to OSHA, approximately 30 million workers are exposed to hazardous noise every year in the United States. Thousands of those workers sustain hearing loss because of noise exposure. The Bureau of Labor Statistics estimates that, since 2004, about 125,000 U.S. workers have reported “significant, permanent hearing loss” associated with their jobs.

Temporary hearing loss because of short-term noise exposure may be addressed with proper rest, but permanent hearing loss can’t be reversed. People who lose hearing often deal with psychological and social effects such as frustration, feelings of isolation and stress. Ramifications extend into the workplace, where a worker with hearing issues might not recognize an alarm or a warning from a colleague.

“Hearing loss itself is considered a health issue,” said Dr. Amanda Azman, a NIOSH research audiologist with the Pittsburgh Mining Research Division. “It’s a negative health outcome of certain activities, but it leads to a safety issue in the workplace. That’s why it’s important to ensure that people can maintain the hearing that they have, not to lose any more, and for those who are younger and maybe haven’t been in the industry for so long, promote to them how important it is to protect their hearing.”

How loud is too loud?

Additionally, the standard calls for general-industry employers to create a hearing conservation program when workers are exposed to 85 dBA or higher for an eight-hour period.

Baseline and annual audiograms may help participants in a hearing conservation program determine whether workers are avoiding hearing loss. If a worker shows a change in hearing test results – described by experts as a “standard threshold shift” – the employer is required to fit or refit the worker for hearing protection, train the worker on proper use, and ensure the worker wears the protection.

OSHA offers the following signs that a workplace might be too noisy:

“There are many things that individual companies or manufacturers can do,” Azman said. “Almost all mining companies should have some sort of hearing conservation program. The problem is that they don’t necessarily follow all of the components.

NIOSH leads a “Buy Quiet” inititaive that encourages the use of quieter, more modern machines.

“One other thing is machine maintenance. In anything where there is large equipment, when maintenance is bad, often the machine starts to rattle and shake and bump in ways that don’t happen if they’re in good working order. If you have an old machine that is noisy, it doesn’t mean nothing can be done.”

Noise exposure is leading cause of tinnitus, experts say

Tinnitus, also known as ringing in the ears, is different than hearing loss. But that doesn’t mean the condition should be ignored or downplayed by safety professionals, experts say.

“It’s bigger than just a little ‘ringing in the ears,’” said Jennifer Born, program director for the Portland, OR-based American Tinnitus Association. “We have been saying that for years, but now we’re really starting to see the impact of it.”

The impact is widespread: According to the association, approximately 50 million people have tinnitus, which causes individuals to perceive sound in one or both ears when no external source of that sound exists. Of those 50 million people, about 12 million suffer from chronic tinnitus, a debilitating condition that may lead to missed work, anxiety, depression and other issues.

Some workers with tinnitus also suffer from hearing loss. A recent study from NIOSH found that workers in manufacturing face significantly higher risks for tinnitus and the co-occurrence of hearing difficulty and tinnitus. However, the conditions are not always intertwined.

Born said the majority of tinnitus cases were preventable. She encouraged safety professionals and workers to protect their ears both on and off the job. The leading cause of tinnitus is noise exposure, followed by a head or neck injury.

“There are these little hair cells inside your ear that take sound in and send the sound signal to the brain. If they’re tired, they’re going to be more susceptible to falling over and essentially dying. Once they’re damaged, they don’t regenerate in humans. That causes hearing loss, and that potentially could be the cause of your tinnitus.”

Born recommended the topic as a possible toolbox talk for safety professionals. To learn more about the condition, and to listen to sample tinnitus sounds, visit www.ata.org.

Vulcan began conducting audiometric tests in 1976 – years before the practice was required by OSHA and the Mine Safety and Health Administration. The tradition continues 40 years later at the organization, which supplies workers with sound-level meters and encourages them to test noise levels. The devices, which cost about $80, empower workers to protect their hearing, Bailey said.

“We have hourly employees that are doing sound-level meter testing, and if they find a piece of equipment, immediately they can go after it themselves – before the safety and health guy may even know it’s happening,” Bailey said. “We have a lot of people contributing to reducing noise.”

New workers at Vulcan quickly learn about the importance of testing noise levels.

“When we acquire a smaller, mom-and-pop operation, they weren’t getting this kind of treatment [before the acquisition],” Bailey said. “At first, you do your audiometric testing, and everyone is a little bit apprehensive about it. But they soon learn that it’s part of the Vulcan way, the Vulcan culture. You’re not going to be in trouble for having a high noise. You’re going to be involved in the resolution of that issue.”

The mining sector has the highest prevalence of hazardous noise exposure of any industry, according to NIOSH. Hearing loss is a lagging indicator, and it could take years before experts know whether current efforts are succeeding. Another challenge: Separating occupational noise from recreational noise. Safety professionals can help by reminding workers to protect their hearing off the job as well, particularly when it comes to hobbies such as using power tools, listening to loud music and driving all-terrain vehicles.

Azman said she is optimistic that long-term data will show progress in hearing protection.

“One of the good things we’re seeing is an improvement in recognition that noise is a hazard, that hearing loss is a bad thing, and that you don’t have to accept that it’s just a condition of your job,” Azman said. “We’re seeing an improvement in that recognition, where I don’t think maybe 15 years ago noise and hearing loss was really recognized as such a life-changing issue. “People don’t lose their lives from noise, and that’s why sometimes it’s maybe not recognized as much as the other hazards that exist. But it changes your life.”