We use cookies to provide you with a better experience. By continuing to browse the site you are agreeing to our use of cookies in accordance with our Privacy Policy.
Home » Michigan OSHA issues hazard alert about working near ice
Slips, trips and falls Injury prevention 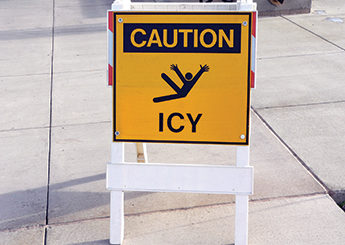 Lansing, MI – Even though winter is in its final weeks, workers need to keep taking proper precautions around ice, Michigan OSHA states in a hazard alert released in February.

Eighty-eight workers in Michigan were hospitalized from 2014 to 2015 because of falling on ice on the job, according to state hospital surveillance data. Actual injury counts likely are much higher, MIOSHA stated, because the hospital data does not include workers who sought treatment in emergency departments, urgent care clinics or doctors’ offices.

Of the 88 workers who were hospitalized in the past two years, most required surgery. More than three-quarters of the injuries were to lower extremities. The average hospital stay was three-and-a-half days.

MIOSHA offers numerous tips to prevent ice-related falls both at work and en route to work: