We use cookies to provide you with a better experience. By continuing to browse the site you are agreeing to our use of cookies in accordance with our Privacy Policy.
Home » Canada, OSHA outline plan for hazcom coordination
Hazard communication Manufacturing 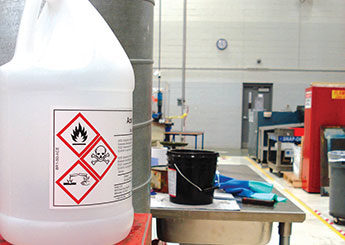 Washington – Employers can now meet hazard communication requirements for both the United States and Canada with a single label and Safety Data Sheet, safety officials from the two countries said during a March 3 webinar.

Representatives from OSHA and Health Canada conducted the webinar to discuss efforts in coordinating workplace hazard communication regulations between the two countries as part of implementation of the Globally Harmonized System of Classification and Labeling of Chemicals.

GHS, which is a United Nations initiative, is currently on its sixth revision. OSHA plans to stay as current as possible with GHS, according to Maureen Ruskin, OSHA’s deputy director for the Directorate of Standards and Guidance. The agency is looking at changes made through the sixth revision, and will examine how to coordinate timing with Canada on any potential changes.

The two countries have created a draft work plan outlining coordination efforts for 2016 and 2017; stakeholders have until March 31 to submit formal comments. In April, Health Canada and OSHA are slated to conduct discussions on finalizing the work plan based on comments, and a bi-national stakeholder meeting May 4-5 in Washington is set regarding the final draft work plan and implementation.

The final version is scheduled for release on June 30. Coordination efforts include dealing with compliance differences between the two countries’ rules, which can have an impact on guidance. The two agencies are working to identify and minimize potential variances, but officials said guidance documents issued by one country would only apply to compliance with that country’s rules and regulations.

Some stakeholders during the webinar questioned what attempts have been made to encourage Mexico to adopt regulations that parallel those in the United States and Canada. Ruskin said that outside of some “high-level discussions” in the past, not much has come of the idea. However, she stressed that the United States is open to further discussions with its southern neighbor about the issue.