We use cookies to provide you with a better experience. By continuing to browse the site you are agreeing to our use of cookies in accordance with our Privacy Policy.
Home » Returning to work after a stroke
Return to work

Returning to work after a stroke 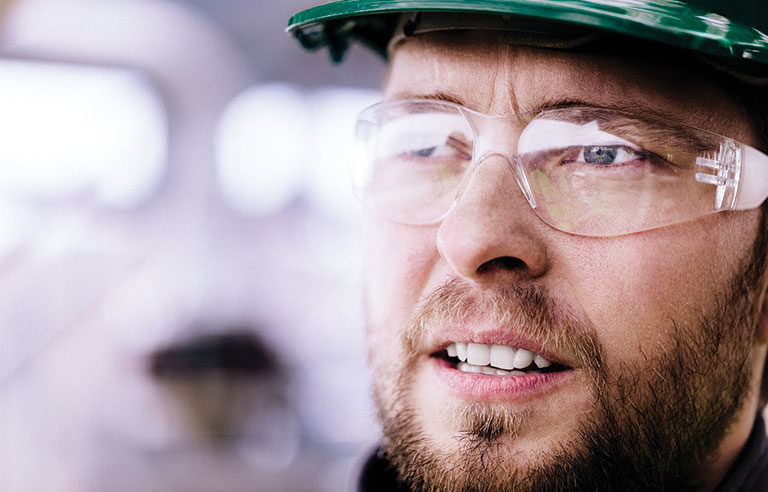 As a vocational rehabilitation counselor for the Rehabilitation Institute of Chicago, Robert Trierweiler helps assess whether workers with impairments can safely return to work. Some of these workers are stroke survivors.

Trierweiler has ridden in the cabs of trucks to observe how drivers who have had a stroke react to road conditions. He has watched an employee perform construction work on the side of an interstate highway. And he has taken notes while an intensive care unit technician conducted ultrasounds.

“We don’t want anybody going back who’s going to present a safety hazard to themselves or others,” Trierweiler said. “I make that clear with the employee and the stroke survivor. We can’t compromise on safety.”

During a stroke, blood flow to the brain is cut off, resulting in cell death and potential health effects that include paralysis, balance issues and difficulty speaking. The condition is the top cause of disability in U.S. adults, with almost one-third of strokes occurring in people younger than 65 – many of whom plan to return to work, according to the National Stroke Association. To help employees return to work, experts say, employers need to understand the impairments related to stroke and how these workers can be accommodated.

“A lot of people have a very negative bias or impression of what a stroke entails,” said Dr. Mitchell Elkind, professor of neurology and epidemiology at Columbia University College of Physicians and Surgeons in New York and chair of the American Stroke Association Advisory Committee. “Most people, when they think of stroke, they think of a person who’s paralyzed and can’t walk or speak, is lying in bed and can’t take care of themselves. Certainly, there are strokes that do that. But there are a lot of strokes that don’t do that.

“It’s important for the public and employers to recognize that just because somebody had a stroke doesn’t necessarily mean they can’t return to work and to doing the job they did before. It all depends on how serious the stroke was, how severe it was and the nature of the deficits. It’s really a very individualized kind of phenomenon.”

Although impairments after a stroke and recovery time can vary, a stroke survivor may need an extended period of time to recover before returning to work, according to some experts.

“For some people, it may take them six to eight months to recover,” Trierweiler said. “Employers often aren’t aware it may take that long. They’re used to somebody [who] breaks their arm – it may take six weeks and they can be back at work. But stroke, it’s a much longer recovery period.”

People who experience mild strokes may not exhibit obvious issues such as paralysis or speech problems afterward, which results in doctors possibly not referring them to therapy or testing for other issues, said Vicki Kaskutas, associate professor in occupational therapy and medicine and assistant director of the post-professional occupational therapy doctorate program at Washington University School of Medicine in St. Louis.

“The people with severe strokes are getting the services and resources,” Kaskutas said. “The people with mild strokes, which are most of the young people, aren’t getting anything. They’re trying to go it alone and ending up with having 30 years ahead of them where they should be working and they’re not.”

Employers can benefit from workers who return to work after a stroke.

“They know that job backward and forward. They know the environment, the people, the routine,” Kaskutas said. “People are much more successful if they go back to their old job, which means we’ve got to get to them before their old job is filled or they lose their old job. That means we need to get them care quick, and collaborate.”

Employers can help workers make a successful return by allowing accommodations. The Job Accommodation Network, a service provided by the Department of Labor’s Office of Disability Employment Policy, provides some examples of accommodations for workers with motor limitations as a result of a stroke:

Visit the Job Accommodation Network to learn more about accommodations.

An employer can ask for a medical reason for an accommodation and a note from a doctor if a worker requests an accommodation, according to the Rehabilitation Institute of Chicago.

Experts recommend workers make a gradual return, building up their hours and workload over time, and that all parties – employers, workers and doctors – communicate with each other about policies regarding leave and other relevant issues.

The United Kingdom-based Stroke Association offers “A complete guide to stroke for employers,” which presents the following 10 tips for helping survivors return to work after a stroke:

A 2016 study from the University of Cambridge and Queen Mary University of London found that “invisible impairments” such as fatigue and concentration issues challenge stroke patients who return to work.

Researchers reviewed more than 22,000 posts on TalkStroke, the Stroke Association’s United Kingdom-based online forum, and found 60 stroke survivors who returned to work. Participants reported that most of their impairments were “invisible,” such as fatigue, issues with memory and concentration, and changes in personality – potentially putting them at risk of losing their job. Adjustments such as shorter hours, working from home and a gradual return to work were crucial to a successful return.

“Invisibility of impairments often led to a lack of understanding as they are not immediately obvious, in particular by the employer but also the general practitioner and stroke survivor themselves,” they noted.

The researchers suggested that awareness of invisible impairments can be increased through campaigns that educate about stroke-related issues, as well as improved application and clarity of policies and guidelines.

Download a paper on return-to-work recommendations for stroke survivors.

“Employers play a pivotal role in helping stroke survivors with returning to work, and this could be improved through better understanding of residual stroke impairments,” researcher Anna De Simoni told Safety+Health.

Role of the therapist

The employer, the worker, doctors and possibly an occupational therapist help determine if a stroke survivor is able to return to work. A worker may have to change duties depending on his or her impairments. Workers returning after a stroke should be able to do their tasks adequately and safely, Trierweiler said.

An occupational therapist will evaluate whether a stroke survivor can resume activities, such as work and driving. They also can show the survivor how to perform one-handed maneuvers for opening packages and using a computer, among other tasks.

“There’s definitely situations where they can go back to safety-sensitive work, but that’s where the role of an OT is so important to do some evaluation to understand the safety requirements, the risks and hazards, and the exposure the person may put the public or other people at if have they problems,” Kaskutas said. “Do some trials. [It’s] not like you’re in the clinic one day getting therapy and the next day you’re the person driving that oil rig across the country.”

Trierweiler discusses with patients their duties and obtains a written description of their job. Sometimes, he will visit the jobsite, which he does more often in industrial settings. He reports his findings to the worker’s doctor and therapy team.

Ideally, the worker simulates his or her tasks. However, sometimes, the therapist cannot simulate the job.

“I’ve worked with police officers who’ve had strokes. We don’t have a firing range,” Trierweiler said. “If it’s a police officer, we would have their department have a trained firearms instructor check to make sure they’re safe with their weapon.

“If something is specialized, we would defer to the company or the employer to make sure they pass any type of safety training or safety testing normally required as part of that job.”

In one case, Trierweiler observed a stroke survivor who worked for an export company. The worker’s balance was impaired, and he had difficulty climbing ladders. The employee was allowed to work with the ground crew with the restriction that he could not climb ladders.

In another case, an office worker went on long-term disability after trying to return to a job that was more cognitively demanding than was realized.

Most employers are cooperative and willing to make reasonable accommodations, Trierweiler noted.

“[Employers] shouldn’t be scared. Just because a person had a stroke doesn’t mean they’re going to have another one at work,” Trierweiler said. “We even encourage stroke survivors to visit where they work before they go back. That helps decrease the apprehension and anxiety on both sides. Some companies feel they shouldn’t talk to somebody on medical leave, but we find talking and communicating is very important. It shows how the employer is supportive of the survivor.”