We use cookies to provide you with a better experience. By continuing to browse the site you are agreeing to our use of cookies in accordance with our Privacy Policy.
Home » Home cooks spreading lots of germs, USDA study shows
Home and Community Safety & Health 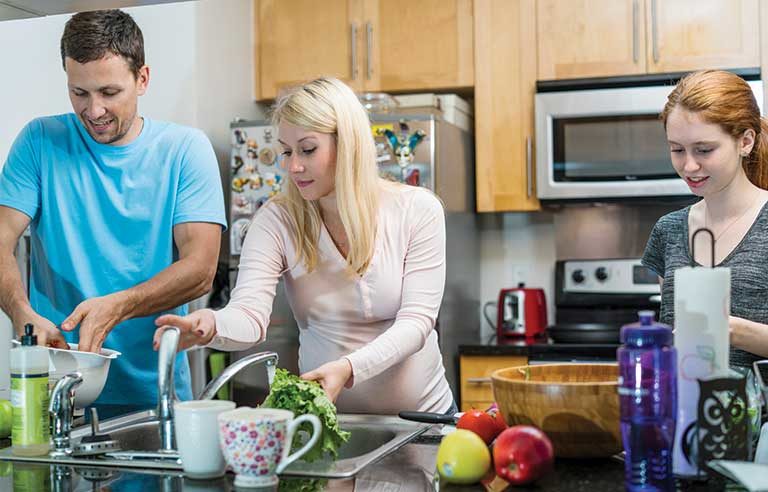 Washington — Washing your hands and using a meat thermometer help prevent the spread of germs during meal preparation, but a recent study from the U.S. Department of Agriculture shows many people may be skipping these important steps.

The USDA’s Food Safety and Inspection Service, with help from RTI International and North Carolina State University, observed 383 people working in six test kitchens – 182 of whom first watched a short video on using a food thermometer. Handwashing was not covered in the video. Cameras in the test kitchens recorded participants’ meal preparation from start to finish.

After meal preparation and cleaning, researchers collected microbiological samples from lettuce and the kitchen surfaces.

Results showed that participants in both groups washed their hands only about 30 percent of the time in the cases “in which a handwashing event was needed to decrease the risk of cross-contamination (e.g., before meal preparation and after handling raw product).” Those who did wash their hands often did an inadequate job. Only 60 percent of participants wet their hands before washing, and only 41 percent scrubbed with soap for at least 20 seconds.

Among the participants who didn’t watch the video, almost half contaminated spice containers, such as salt and pepper shakers, that they touched while preparing turkey burgers. Refrigerator handles (11 percent), faucet handles (11 percent), mobile devices (6 percent) and salad lettuce (5 percent) rounded out the list.

Video-watchers used a thermometer more than twice as often (75 percent vs. 34 percent) as the other group of participants. They also placed the thermometer in the proper location, the center of the meat, 52 percent of the time compared with 23 percent for those in the non-video-watchers group.

A June 18 press release from USDA states that 48 million Americans are sickened by foodborne illnesses annually, resulting in about 128,000 hospitalizations and 3,000 deaths. The agency reminds people to wash their hands thoroughly with soap and water for at least 20 seconds after handling raw poultry, meat and eggs. It also recommends drying hands with a clean towel and using a food thermometer to check internal temperature.

“As a mother of three young children, I am very familiar with the mad dash families go through to put dinner on the table,” Carmen Rottenberg, acting deputy under secretary for food safety at USDA, said in the release. “You can’t see, smell or feel bacteria. By simply washing your hands properly, you can protect your family and prevent that bacteria from contaminating your food and key areas in your kitchen.”

Videos, checklists and other resources are available at foodsafety.gov.