We use cookies to provide you with a better experience. By continuing to browse the site you are agreeing to our use of cookies in accordance with our Privacy Policy.
Home » ‘Seeing’ safety in a new way
Hazard communication Injury prevention

‘Seeing’ safety in a new way When seen in color, the danger comes alive.

It’s a leopard surrounded by brush, its menacing eyes locked on a potential meal.

During the 2018 National Safety Council Congress & Expo this past October in Houston, the Center of Visual Expertise – founded by the Toledo Museum of Art in Ohio – shared these images as part of a visual literacy experience designed for safety professionals to better see occupational hazards in everyday surroundings.

“We live in a very ‘noisy’ environment,” said Adam Levine, COVE’s advisory board chairman. “There’s so much visual stimulus and sensory stimulus that we have to tune out.

“We all know that we use our attention selectively. That applies to vision as well. You’re leveraging your selective attention on the basis of the image you’ve already seen to focus on the part of the image where you know there to be a hazard.”

Along with exhibiting the program in Houston, COVE and the museum have partnered with the Campbell Institute at the National Safety Council to bring visual literacy training to numerous companies.

“Not a whole lot of safety training is fun,” Campbell Institute Director John Dony said. “This is engaging. It’s fun.”

Look at the black-and-white photo: Do you see the leopard hiding? The color photo shows the leopard clearly. These and other images are used in visual literacy training, which teaches workers to better “see” their work environment and identify on-the-job hazards. 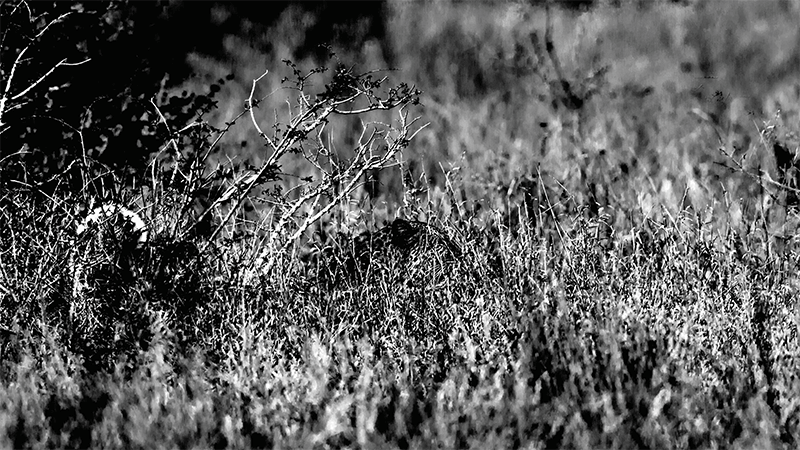 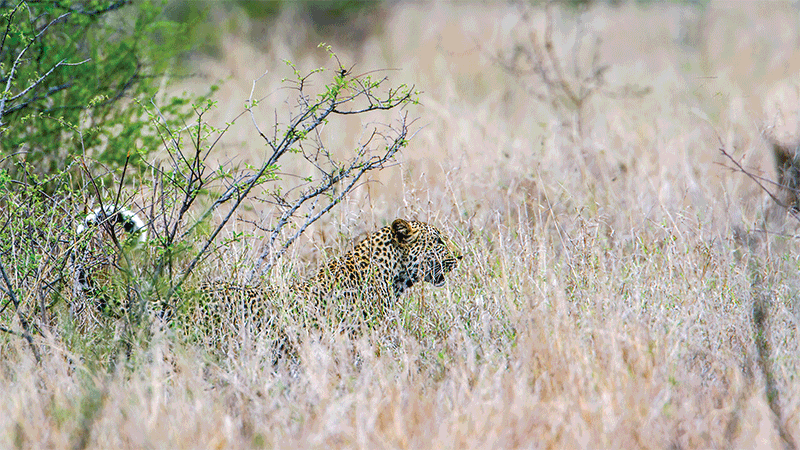 Learning visual literacy, according to the Campbell Institute, gives employees the ability to better understand their work environments. It also helps in enhancing hazard identification and comprehension of potential risks.

“It’s usually the most obvious things that you miss,” Levine said. “The things you walk past a thousand times and never realized they’re an issue – that’s what this is. That’s what we’re training people not to do. That’s part of the reason we feel like we’re really onto something.”

In a 2018 white paper, the Campbell Institute points out that about 90 percent of the information individuals take in is visual. With so much visual data being processed, people filter it to see only what’s important to them.

This leads to what is called inattentional blindness, or perceptual blindness, which is becoming blind to the countless details. By using visual literacy’s step-by-step procedure to visually process a scene, and becoming aware of individual visual biases, safety professionals “truly ‘see’ as much detail as possible,” the white paper states.

One of the most unique aspects of COVE’s visual literacy training is that it takes place outside the workplace. For most participants, a work-related safety program at an art museum is out of the norm. But for Levine, it makes perfect sense.

“If you do the workshop at work, you have all the inherited hierarchy of that workplace,” Levine said. “There’s a great leveler about being in a neutral space, which is so different from the workplace.

“The thing we’re uniquely equipped to provide is sensory education. We are an education institution. We engage all of the senses in our displays and in our teaching. That’s how we learn. Human beings learn by creating memories that are caused by emotion. That emotion is triggered by the senses.”

The same senses involved in learning also are activated in many workplaces, where safety is a top priority.

“I’ve been astonished walking into these factory environments,” Levine said. “Not just by the nature of the work, but these are loud places. There are smells. This is a multisensory environment. To allow people to actively engage those senses, of which sight is the dominant sense, is a place that museums are uniquely suited to play.”

TMA hosts monthly workshops for two to three representatives from each company in a train-the-trainer model. Along with describing and drawing exercises intended to spark the senses, the training involves seeing in a different way through art by examining five essential art elements: line, shape, color, texture and space.

Participants begin by using the concepts on works of art throughout the museum. The training also works to break down an individual’s “visual biases,” which include:

“A lot of what we do is make you aware of your visual and cerebral biases,” Levine said. “It’s only when you’re aware of them that you can begin to mitigate them. Art is an unmatched tool for exposing those biases.”

Campbell Institute member Cummins Inc., a global corporation that designs, manufactures, distributes and services a range of power technologies, has experienced the impact of visual literacy at one of its manufacturing plants.

According to the Campbell Institute’s white paper, 225 plant employees, as of this past March, had been trained and had identified 132 potential hazards using the visual literacy teachings. Twenty-five of the hazards were corrected via the company’s “Find It Fix It” hazard recognition and correction initiative. Among those issues addressed were new treads and a corrected rise and run on a set of steps that were not to code, as well as adding a handrail to one side of the steps. Additionally, grips were added to other handrails and the sharp edges of a fail-safe for stopping an engine were ground down to improve safety.

He said the training can provide dividends for all employers. “The way COVE has structured the toolkit is that it’s plug and play for any organization, meeting them where they are. It’s not trying to impose a new service. It’s giving them tools to plug in to their existing structure.”

And no matter an organization’s size, safety is a common theme. “These are fundamental concepts for safety,” Dony said. “Everyone has to do hazard identification and recognition. It doesn’t matter whether you’re big or small.”

The Center of Visual Expertise and the Toledo Museum of Art in Ohio have partnered with the Campbell Institute at the National Safety Council to bring visual literacy training to workers. What started as a pilot program in 2015 in the Toledo area now involves several Campbell Institute member companies.

“The institute’s job is to promote thought leadership and look for things that are going to advance safety,” Adam Levine, COVE’s advisory board chairman, said. “This is an application people probably never thought of for art museums.”

The Campbell Institute is working on a three-year study of the visual literacy program and a third white paper that will focus on the efficacy of the training. With the help of two photos of a leopard – and how safety professionals see them – workplaces across the country can “see” a clearer path toward a higher level of safety.

“The most exciting thing is to be on the front end of this,” Campbell Institute Director John Dony said. “This is the leading edge for safety.”