We use cookies to provide you with a better experience. By continuing to browse the site you are agreeing to our use of cookies in accordance with our Privacy Policy.
Home » My Story: Arthur W. Heredia
My Story At first, I was fascinated by Sheriff Quick Draw McGraw and his alias, El Kabong. He was a cartoon character and why my fascination with law enforcement began. Later on, it was actor Efrem Zimbalist Jr. in the TV show, “The F.B.I.” Yeah, that’s what I wanted to become.

I grew up in the late ’60s and early ’70s. Life was anything but boring in the inner city of East Chicago, IN. Social advancement was challenging for minorities. I had an outstanding wrestling coach who was my mentor. My biggest accomplishment at that time was becoming a two-time, 114-pound Lakeshore Conference champion in wrestling. This disciplined sport gave me the confidence I needed to face any challenge.

My big breakthrough was when I was commissioned a probationary firefighter. My passion for safety was ignited. My transition from a boy to a man continued for 12 years while with the fire department. After getting a bachelor’s degree, I rose to the rank of captain. House fires, car wrecks, bridge collapses – you see a lot more than the average person ever would. Still, I wanted to achieve my ultimate goal of becoming an FBI agent.

I left the fire department when I was commissioned a Drug Enforcement Administration special agent. If I thought the fire department was fascinating, the DEA gave me the ability to see the world through the federal level and contribute to the noble cause of reducing the level of narcotics in our country.

Still, I found that the fire department and law enforcement had a narrow scope when it came to safety. Even after earning master’s degrees in law enforcement and public safety, I felt a little behind the proverbial eight ball. It wasn’t until I became an OSHA instructor that I felt I had turned the corner in understanding the fundamental breadth and scope of safety. As a safety officer in Cook County, IL, I am able to use all my academic training and professional experience to help reduce the amount of on-duty injuries through a rigorous hazard recognition safety program.

It has been a privilege and an honor to serve my country. My safety motto is “No shortcuts.” As I slide closer to retirement, I remain committed to being the best safety officer I can possibly be. 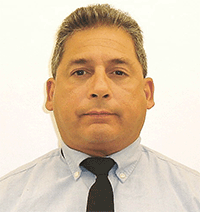