We use cookies to provide you with a better experience. By continuing to browse the site you are agreeing to our use of cookies in accordance with our Privacy Policy.
Home » Wildfires and worker health
Injury prevention

Smoke is a hazard indoors and out 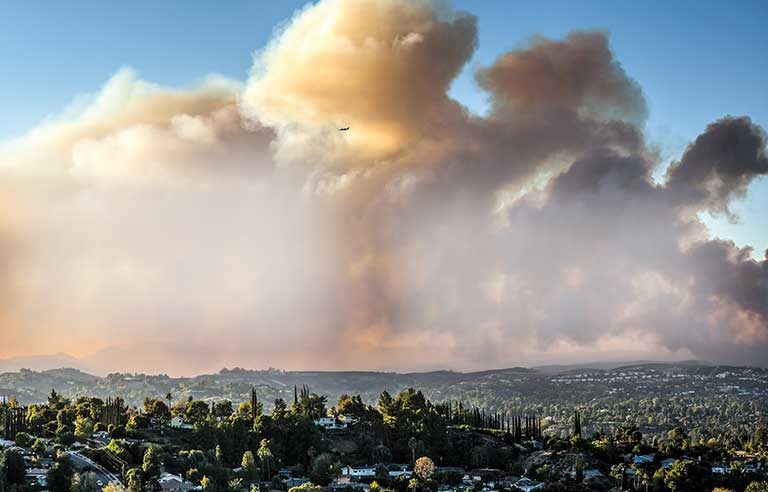 Don Galloway wants to clarify a couple of popular beliefs about wildfires. “Usually when folks think wildfire, they think Western U.S. and large, remote areas,” the chief operating officer for the Texas A&M Forest Service said. “It’s a rural problem. It’s an urban problem. It’s something everyone should have an awareness of.”

The U.S. Forest Service defines a wildfire as an “unplanned fire burning in natural (wildland) areas such as forests, shrublands, grasslands or prairies” caused by lightning, volcanoes, or unauthorized or incidental fires started by people.

Over the past 20 years, recorded wildfires in the United States have totaled fewer than 5,000 only four times, data from the National Oceanic and Atmospheric Administration shows. Through July, this year’s total was approaching 6,000.

Naturally, outdoor workers – including those who respond to wildfires – are most impacted, both directly (from the fires themselves) and indirectly (from smoke and fine, airborne particles dispersed by the fires). However, workers in commercial buildings and office locations near wildfires also face risks. “The smoke from wildfires can affect the air quality and poses a hazard for nearby workers and inside structures without adequate ventilation,” said Doug Parker, chief of the California Division of Occupational Safety and Health – also known as Cal/OSHA.

Wildfires can have an adverse health effect on workers, especially if they have the following conditions or factors:

Respiratory: Workers who smoke are at greater risk of respiratory health issues resulting from wildfire smoke because of potentially limited lung function, said Julie Postma, associate dean for research and an associate professor at the Washington State University College of Nursing. Also, workers who have asthma are at increased risk.

Cardiovascular: Workers with angina or arrhythmia are considered high risk. “Anything that would impact the oxygenation of your blood if you’re compromised” is a potential issue, Postma said.

Age: Older adults are more likely to have an increased risk for heart and lung diseases, making them more vulnerable, the Centers for Disease Control and Prevention says.

Mental health: “If you’re starting out with some mental illness or challenges, this is going to compound that,” Postma said. “It can seem apocalyptic.”

The impact of COVID-19

As in many work settings, the COVID-19 pandemic is having an impact on workers affected by and responding to wildfires, experts said.

“It certainly is going to have an impact on wildfires in terms of the availability of resources to support a major wildfire event,” said James Keck, assistant professor in the homeland security and emergency management program at Virginia Commonwealth University.

Keck said because wildfire responders come from all over the country, “there obviously will be some anxiety and concern” about bringing them together to fight fires and potentially spreading the disease.

“I would be setting up some initial testing for everybody,” he said. “Once they’re there, they’re going to stay there” and not let additional personnel arrive unless they’re tested and cleared.

In several states, including Louisiana, Michigan and Washington, farmers and agriculture companies donated N95 respirators to hospitals and health care facilities as the number of COVID-19 cases rose. Now, those agriculture workers and others who work outdoors need masks themselves as protection against wildfire smoke.

Further, the pandemic is increasing the risk of more destructive wildfires nationwide. Although the U.S. Forest Service, at press time, said it hadn’t issued an agencywide halt of prescribed burns – a strategy of planned or controlled burns to reduce the risk of wildfires – states including Arizona, Minnesota and Montana had limited or suspended the practice.

Exposures among workers in these areas are especially concerning to Postma, whose focus is on occupational and environmental health nursing.

Postma said landscapers, masons, roofers and painters, as well as those in grounds maintenance, construction and agriculture, should be particularly vigilant. “Most of those folks spend a majority of their time outside,” she said.

In an article written by Postma and published in December in Worker Safety and Health – the journal of the American Association of Occupational Health Nursing Inc. – she wrote: “As wildfire intensity and frequency increases, outdoor workers are at risk of breathing wildfire smoke for sustained periods.”

The danger for workers – particularly those in outdoor settings – is the smallest particulate matter (2.5 micrograms or smaller, or PM2.5), which can cause eye, throat and sinus irritation, along with headaches, coughing and shortness of breath, according to CDC.

The Environmental Protection Agency’s “Wildfire Smoke: A Guide for Public Health Officials,” revised in 2019, states that 90% of particle mass emitted from wildfires is fine particulates.

Under the regulation, employers are required to provide N95 filtering facepiece respirators to workers on days when the local air quality index for PM2.5 is 151 or higher, and when employers reasonably anticipate that workers could be exposed to wildfire smoke. An air quality index reading above 150 is considered unhealthy, according to EPA.

Employers and workers can check the air quality index in their area by visiting AirNow.gov and entering their location into to the tool.

Cal/OSHA conducted a public hearing May 21 as part of the process of making the standard permanent. The date of the hearing coincided with the end of a seven-week public comment period.

“(We) anticipate further rulemaking to make the standard more comprehensive and provide additional stakeholder input as we learn more about the hazard of wildfire smoke and the implementation of the standard,” Parker said.

When it comes to protecting workers from smoke-related hazards from wildfires, Postma said the Hierarchy of Controls offers the best option.

“We’re likely not going to be able to eliminate the smoke,” she said. “We can’t substitute something else, like with a pesticide you can substitute a safe chemical. There are some engineering controls. People who are mowing lawns could be in something like a cab with filtered air. Administrative controls are probably the most effective bet in terms of reducing exposure.” Employers should stagger work shifts, move work if possible, modify tasks that require the most exertion, and offer more rest periods and breaks in areas with filtered air.

“We can’t assume that indoor air is clean air,” Postma said. “We want to look beyond PPE in the Hierarchy of Controls – that’s the last step.”

Cal/OSHA says that if a building “has a central ventilation system that filters the air, windows and other openings are kept closed, and the doors are kept closed except when people enter or exit, the air quality should be safe. If there are still concerns with the air quality, portable air cleaners can provide additional protection.”

OSHA recommends that employers have an evacuation plan in place to avoid worker injuries and confusion should a wildfire escalate in severity.

OSHA recommends that employers have an evacuation plan in place to avoid worker injuries and confusion should a wildfire escalate in severity. Some businesses are required to have an emergency action plan under OSHA’s Means of Egress Standard (1910.38).

For small businesses that don’t have a wealth of resources, OSHA offers wildfire-related QuickCards and fact sheets on its website, along with links to CDC, NIOSH, the U.S. Department of Agriculture and other safety documents, including FEMA’s “Prepare Your Organization for a Wildfire Playbook.”