We use cookies to provide you with a better experience. By continuing to browse the site you are agreeing to our use of cookies in accordance with our Privacy Policy.
Home » SPONSORED BY
Resources Sponsored content Slips, trips and falls Injury prevention
Sponsored

Despite slip and fall accidents accounting for 15 percent of all accidental deaths in the United States, second only to motor vehicle accidents, there is a growing yet dangerous trend to eliminate the most critical measurement to prevent slips on hard-walkway surfaces.

The coefficient of friction (COF) of a walkway surface has long been established as the key measurement required to understand the propensity for humans to slip on a given walkway surface. Tribometers are the devices used to measure the COF.

The static coefficient of friction (SCOF) determines the critical threshold at which traction is lost. By definition, SCOF is the ratio of the applied horizontal and vertical forces, precisely at the point a slip begins. While SCOF is zero when standing still, walking generates increasing horizontal and vertical forces, demonstrated by three-dimensional force plates. Exceeding SCOF’s maximum safety value results in slipping.

The dynamic coefficient of friction (DCOF) is the ratio of applied horizontal and vertical forces required to continue slipping across the floor. As a practical matter, DCOF reflects the phase in a slip that is too late for prevention – you are already slipping! SCOF is always greater than DCOF, and a measurement of one does not relate to the other – there is no linear relationship. Slip prevention on a walkway surface requires safety SCOF values to be well above the slipping phenomenon. Figure 1 via a DCOF measurement shows the oscillating horizontal and vertical forces generated during slipping. Figure 2 is a force-plate measurement of an actual human slip across a tile surface. Degree of oscillation reflects variables such as speed of the sliding foot, contaminates and the floor – all problematic for a reliable safety threshold.

Despite the clear and unambiguous definitions of SCOF and DCOF, the slip prevention industry is gravitating to DCOF measurements when evaluating the safety of walkway surfaces. Why is this happening? One reason is that a meter’s sensor that rests on the test surface experiences adhesion or “sticktion” with the surface prior to initiating a test. This is a time-dependent variable and so the longer the sensor rests in place, the greater the adhesion. Consequently, a greater horizontal force will be required to overcome the friction, resulting in an inflated SCOF measurement. Another legitimate concern is the well-known Powers* study that demonstrated none of the 11 most well-known tribometers tested the same COF values on identical surfaces. Hence, recent standards development has chosen to accommodate these disparities versus focus on better-designed tribometers.

A solution to these problems is a novel patented device, the GS-1 tribometer. It has successfully overcome “sticktion” with specially designed software, electronics and mechanics. The GS-1 works by gently inducing a lateral force until its sled breaks traction, slides and calculates both the static and dynamic COF. It is completely operator independent. Calibration uses an absolute-gravity method and easily done by the operator. GS-1 users have attributed its efficiency to a 50% reduction in field time and report generation.

Figure 1 is an example of the GS-1’s output of a common tile floor with annotations to show the first of ten measurements that displays the proverbial stiction effect. The subsequent nine measurements display the correct SCOF and DCOF values represented by each segment’s sharp apex and the oscillating horizontal lines respectively. The average of the nine SCOF and DCOF measurements are displayed at the bottom. 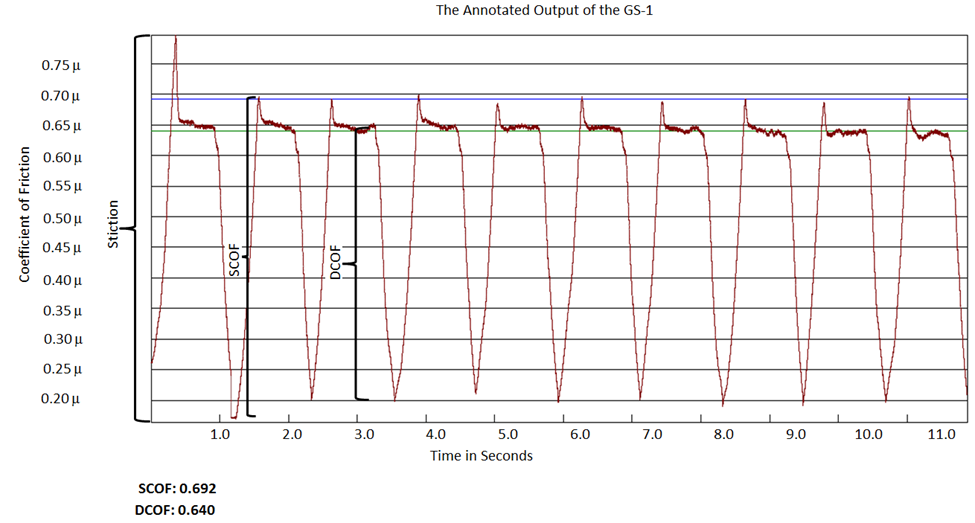 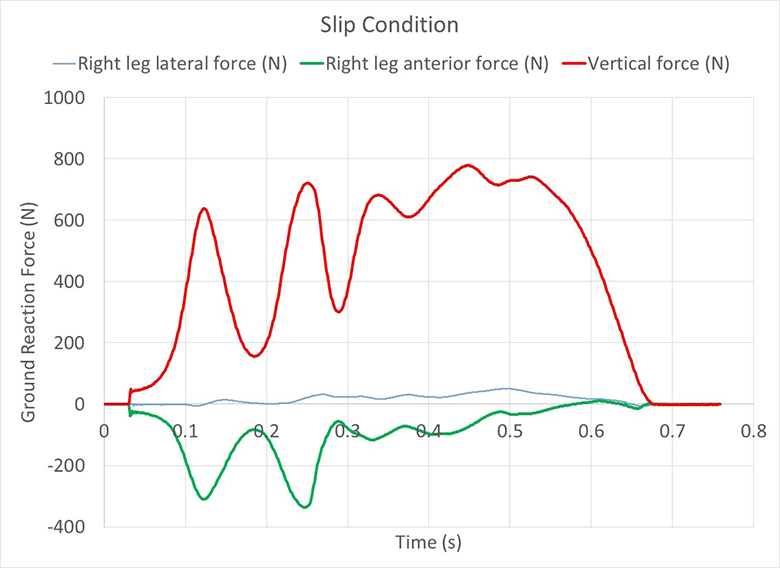 As the legal community gains more knowledge of the science of accurate friction measurements, safety professionals will face more frequent and skilled examination of their work product. A tribometer’s output must unambiguously demonstrate that it is linear over a range of values that are completely independent of any other requirement, such as reference tiles, sensors or the standards. Only the GS1 satisfies this requirement.

GS-1’s measurements ensure defensible testimony in the rigors of litigation.

On the Safe Side podcast Episode 14: OSHA’s ‘Top 10’ and fall prevention

On the Safe Side podcast Episode 23: AI in safety and achieving a just culture