We use cookies to provide you with a better experience. By continuing to browse the site you are agreeing to our use of cookies in accordance with our Privacy Policy.
Home » FACE Report: Father and son painters killed when ladder contacts power line
Safety Tips FACE Reports Fall protection Injury prevention Ladder safety 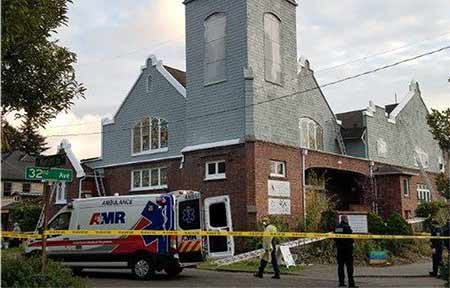 A 55-year-old painting contractor and his 27-year-old son were electrocuted when the aluminum extension ladder they were moving contacted an overhead power line. On the day of the incident, the wind was blowing 15-30 mph, with gusts up to 40 mph. The crew had finished painting for the day and was cleaning up the site. The contractor and his son were moving the ladder, which was at its full extension of 48 feet. The two were holding the ladder in a vertical position as the son attempted to retract the ladder’s extension. A gust of wind blew the ladder into a 14,460-volt overhead power line, and an electrical current traveled from the power line through the ladder and through both workers. The contractor died at the scene. His son died nearly a month later.

To prevent similar occurrences, employers should: