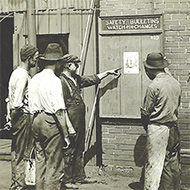 Editor’s Note: This article retains the use of the term “accident” instead of “incident,” as well as the phrase “unsafe acts of persons,” to be consistent with the terminology Heinrich used in his book.

Safety professionals generally agree that Herbert William Heinrich had a significant impact on the practice of safety, but whether his influence was positive or negative remains a subject of debate.

“He was a pioneer in bringing attention to workplace safety; however, to describe what he did as ‘research’ is questionable,” said Judith Erickson, president of Plano, TX-based safety consulting firm Erickson Associates.

Heinrich is best known for his 1931 book, “Industrial Accident Prevention: A Scientific Approach,” in which he said 88 percent of accidents are caused by “unsafe acts of persons” and put forth what often is referred to as Heinrich’s accident triangle or pyramid: In a group of 330 accidents, 300 will result in no injuries, 29 will result in minor injuries and one will result in a major injury.

Neither premise sits well with Michael Taubitz, founder and principal consultant of Lean Journey LLC in Fenton, MI. He called Heinrich’s views a “constraint” on safety professionals who are trying to attack high-severity, low-probability incidents.

“The Heinrich myth prevails and we do little as a profession to dispel myths,” Taubitz said.

Bob LoMastro, a longtime safety trainer specializing in electrical safety, offered a different view. “I think everybody’s taking Heinrich too literally and they’re forgetting his big picture, and the big picture is the vast majority of accidents are forecasted before a big accident occurs – we’ve had opportunities to correct the hazards, but did not,” LoMastro said.

Wrapped up in this issue are questions about Heinrich’s data and conclusions, and if theories espoused 80 years ago even apply today.

Heinrich was an assistant superintendent in the engineering and inspection division of Travelers Insurance Co. in Hartford, CT. For his book, he reviewed 75,000 injury and illness cases – 12,000 from insurance records and 63,000 from plant managers – as well as actuarial and engineering reports.

The book introduces 10 “axioms of industrial safety,” the first of which states: “The occurrence of an injury invariably results from a completed sequence of factors – one factor being the accident itself.” That sums up Heinrich’s domino theory. He believed the following five factors must be present for an accident to occur:

1. Ancestry and social environment
2. Fault of person
3. Unsafe act or mechanical or physical hazard
4. The accident
5. The injury

Decades later, Heinrich’s theories – including the domino theory and accident triangle – continue to draw followers and critics. In his 2002 book, “Heinrich Revisited: Truisms or Myths,” published by the National Safety Council, Fred A. Manuele questioned the validity of the 300-29-1 ratio, noting that Heinrich revised it without explanation in subsequent editions of his book.

Another issue Manuele raised was that the original files Heinrich used do not exist, preventing others from reviewing his work.

James Howe, head of Safety Solutions in Medford, OR, and former assistant director of health and safety for the United Auto Workers, also takes issue with the ratio.

“The pyramid theory has really done a disservice to the safety profession,” he said, “because it has misled people running safety programs into thinking that if they work on minor incidents, major incidents will go away. And many, many companies are aware that that is not the case.” In fact, he said, certain companies with award-winning low injury rates have suffered some of the worst catastrophic incidents during the past 10 years.

In refuting Heinrich’s work, Manuele singled out the 88-10-2 ratio of accident causation as having the most influence and causing the most harm to the safety profession.

“Why harm? Because when basing safety efforts on the premise that man failure causes the most accidents, the preventive efforts are directed at the worker rather than on the operating system in which the work is done,” Manuele wrote.

In addition, Howe said attributing 88 percent of accidents to unsafe acts fails to take into account that accidents usually have multiple causes and contributing factors.

Heinrich’s work forms the basis for behavior-based safety, an approach that focuses on identifying and changing unsafe worker behaviors. Critics claim BBS emphasizes the worker without taking the system into account, a common argument aimed at Heinrich’s theories.

Statistician William Edwards Deming, whose work on quality control is credited with helping to turn around the Japanese economy after World War II, believed the vast majority of problems were the fault of the system (or management), not the worker.

Erickson holds that view as well. She cited a 2010 study from the National Opinion Research Center at the University of Chicago that found 85 percent of workers rated workplace safety as the most important labor standard. The findings fit with Erickson’s observations as a consultant and safety manager, yet she was struck by the dichotomy between that and what Heinrich said.

As a proponent of evidence-based interventions, Erickson’s main critique is that Heinrich’s work was not scientific. He used accident reports completed by supervisors, based his observations on retrospective data and failed to investigate possible underlying causes, she said.

“All he provided was a conclusion, and he primarily relied on the subjective observations of others.” Some of whom “had a stake in blaming the employee rather than assuming any responsibility,” Erickson added.

Howe echoed that concern. “I do think what people don’t realize is that it was flawed data to begin with,” he said. “I don’t think he miscounted reports or was misreporting the data. I think he was probably accurately reporting bad data. I think that’s the problem. I think it has not served us well. It has hurt the profession an awful lot.”

BCSP Viewpoints: Pushing the profession forward: The role of the newest generation