We use cookies to provide you with a better experience. By continuing to browse the site you are agreeing to our use of cookies in accordance with our Privacy Policy.
Home » ‘We challenge ourselves every day’
News/Features Safety culture Leadership

‘We challenge ourselves every day’

Firmenich is the recipient of the 2012 Robert W. Campbell Award An employee inspects equipment at a Firmenich facility in Lakeland, FL, where the company produces citrus and other natural flavors.

If you recently ate cereal or your favorite soup, or washed your hair or used perfume, you likely used ingredients manufactured by Geneva, Switzerland-based Firmenich – the world’s largest privately owned manufacturer of fragrances and flavors. Three key ingredients – environmental, health and safety – have contributed to Firmenich’s recipe for success and led to the company receiving the National Safety Council’s 2012 Robert W. Campbell Award. The award is presented annually to an organization that demonstrates business success while leading in EHS performance.

“We challenge ourselves every day to lead by example in EHS, and I am convinced that companies who hold EHS as a visible core value become better companies,” CEO Patrick Firmenich said in an NSC press release.

“Throughout the Campbell Award process, Firmenich demonstrated a mature and multi-faceted approach to EHS management,” Janet Froetscher, NSC president and CEO, said in the press release. “As a Swiss family-owned business with a global presence, Firmenich has proven that a reliance on values and a sense of responsibility ensures lasting success.”

“What stood out in our minds … is that the leadership was unbelievable across the board,” Fiffick said. “Every employee we interviewed and talked to, they cared about safety.”

Along with making safety a standard value for all employees, Firmenich has been engaging managers and workers in holding each other accountable, said Neil McFarlane, vice president of Global HS&E. In 2005, McFarlane assisted in launching a web-based EHS Global Integrated Management System to encourage hazard and injury/incident reporting. The system provided more transparency and accountability for investigations and corrective actions, making the information available to managers and workers anywhere in the company, McFarlane said.

“This is not a top-down approach, this is a bottom-up approach,” he said. “We have trained our employees in the area of behavioral safety, which gives them the skills and the tools to look at and manage their own safety.” 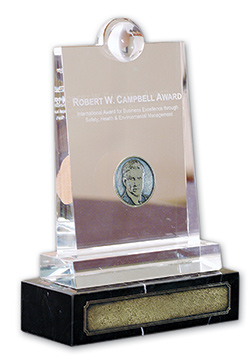 On its application for the 2012 Campbell Award, Firmenich wrote: “As a family-owned business, values and principles based around people, caring, ethics and integrity have always been at the heart of how the company operates.”

This philosophy extends to the safety and health of the company’s employees in all business decisions Firmenich makes, McFarlane said. Being a family-run, privately owned business also allows Firmenich to focus on long-term risk analysis and safety programming rather than always satisfying short-term financial goals, he said.

Fiffick said she was impressed by how the company’s CEO supports and values safety advocates in the company, such as McFarlane, and how accessible he is to them.

McFarlane said safety professionals from any size company can benefit from upper management truly valuing safety. Once you have that support system, promoting safety becomes easier, he said.

Firmenich’s family values-based system transcends employee cultural and regional differences. “This is not about the country or its culture, this is about the culture in the company,” McFarlane said. “We all belong to one big family. We want to make sure that our family is protected to the best possible standard, and that standard is the Firmenich standard.”

“You stand back, think about the things you are doing, think about your achievements and areas of opportunity for the future,” he said. “The Campbell Award review process really does challenge you in terms of your management system, how good you think you really are.”

Firmenich already has begun to actively share its safety values and lessons with others, from very small suppliers to some of the world’s largest chemical companies. McFarlane cited a safety leadership training program Firmenich developed with a global cosmetics company. The collaboration provides mutual benefits and alignment for the partnering organizations and helps each reach its own goals on EHS performance, he said.

Safety is an area of continual improvement for Firmenich: Within the context of the company’s five-year strategy, Firmenich seeks to improve its safety performance even further – by 50 percent at the end of FY 2015. Other employers can learn from Firmenich’s approach to continuous improvement, and sharing this philosophy is important to the company, McFarlane said.

“We take pride in being recognized by our clients as thought-leaders in our industry,” he said. “We are working hard, every day, to maintain this position.”

Sustainability and the environment

As a manufacturer of flavors and fragrances, olfactory and respiratory safety is an important aspect of Geneva, Switzerland-based Firmenich’s environmental, health and safety program. With assistance from toxicologists and external hygienists, Firmenich has launched a companywide study to assess more than 1,000 ingredients. The results will establish ways to best manage chemical-hazard risk for employees working with the ingredients.

A manufacturing site in La Plaine, Switzerland, particularly benefited from Firmenich’s attention to environmental sustainability. In the mid-2000s the site instituted noise and water management and odor-control programs in addition to management safety leadership and worker behavioral-safety programs. Between June 2007 and October 2011, the site’s total recordable case rate improved by 82 percent and its lost-time case rate improved by 92 percent. These results earned the site the Firmenich Jean-Marc Bruel Award for Health, Safety and Environmental Excellence. Named after a previous chairperson, the award recognizes teams that integrate innovative health, safety and environmental management practices into their business excellence goals.

According to Firmenich’s core values statement, “People are the heart” of the company and “adopting the strictest international standards on quality, safety and the environment” is a cornerstone of Firmenich’s sustainability program, said Neil McFarlane, vice president for Global HS&E. This has extended to the company’s sourcing partnerships and the communities in its value chain that Firmenich works with, he said, referencing the company’s support of communities in Haiti, where Firmenich is a principal purchaser of vetiver oil from the area’s rural farmers.

“Our work with farming communities is deeply rooted in the needs and aspirations expressed by the communities themselves,” McFarlane said. “Once we have a full understanding of community needs, we design a program of activities focused on improving the economic, environmental and social conditions for farmers and farming communities. This process takes time but is essential for the success of our initiative to secure a key ingredient while building trust and understanding within the community and transferring those values within the supply chain.”

The Robert W. Campbell Award is named for the occupational safety pioneer who served as the first president of the National Safety Council. For more on Robert W. Campbell and the award that bears his name, visit the Campbell Institute website.