We use cookies to provide you with a better experience. By continuing to browse the site you are agreeing to our use of cookies in accordance with our Privacy Policy.
Home » Blogs » On Safety » Workplace violence: What can we do?

Workplace violence: What can we do?

A couple of weeks ago, on live television, America saw how shocking, brutal and tragic workplace violence is.

TV reporter Alison Parker and cameraman Adam Ward were on location outside Roanoke, VA, when a former colleague shot them while on-air. The killer later committed suicide.

Parker and Ward were the seventh and eighth journalists killed in the United States since 1992, according to the Committee to Protect Journalists, a nonprofit organization promoting press freedom. Worldwide, 1,143 journalists have been slain in the past 23 years. 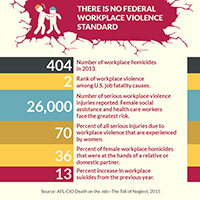 Across all industries, homicide was the cause of death for 404 workers, roughly 9 percent of all occupational fatalities in 2013. In the same year, more than 14,000 private-industry workers were so badly intentionally injured by another individual that they required days away from work to recuperate.

What can be done about workplace violence? Recently, the American Nurses Association called on employers and employees to work together to create a “zero-tolerance” policy on violence, bullying and incivility. Some experts have suggested that early intervention efforts can prevent more severe incidents of workplace violence. The AFL-CIO recently noted in a press release that no OSHA standard exists concerning workplace violence. But should there be one?

I’m interested to know your thoughts. What can employers, the government and organizations do to prevent workplace violence? Can anything be done to prevent attacks like we saw in Virginia? Let me know in the comments below.

The opinions expressed in "On Safety" do not necessarily reflect those of the National Safety Council or affiliated local Chapters.