We use cookies to provide you with a better experience. By continuing to browse the site you are agreeing to our use of cookies in accordance with our Privacy Policy.
Home » Group renews call for standard on poultry-line work speeds
Ergonomics Federal agencies Regulation Worker health and wellness Musculoskeletal disorders 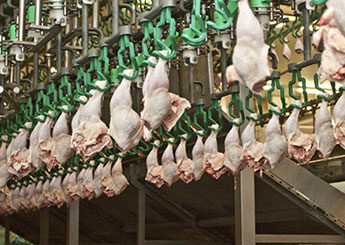 Washington – A group of 15 organizations is calling for a formal response to its request that OSHA develop a work speed standard for meatpacking and poultry plants.

The group, which includes the Southern Poverty Law Center, sent a letter to OSHA on Dec. 17 asking for a written response to its rulemaking petition within 90 days. The 72-page petition, submitted in September 2013, asked OSHA and the U.S. Department of Agriculture to initiate rulemaking aimed toward protecting workers on meat and poultry production lines.

Fast-paced work on the lines has led to repetitive motion injuries and musculoskeletal disorders, according to the group. The repetitive motions include “using substantial force to bend, twist, pull, and cut animal flesh, tendon and bone,” the group said.

In August, USDA published a final rule stating that maximum line speeds at poultry processing facilities would remain at 140 birds per minute. An earlier plan proposed increasing the allowed speed to 175 birds per minute, but critics said the increased speed could lead to more injuries among workers. In its Dec. 17 letter to OSHA, the group said more needs to be done.