We use cookies to provide you with a better experience. By continuing to browse the site you are agreeing to our use of cookies in accordance with our Privacy Policy.
Home » ‘Red flag’ or ‘blacklist’? Contractor disclosure of labor-law violations under debate
Contractors Federal agencies

During the joint hearing before the Workforce Protections and Health, Employment, Labor and Pensions subcommittees, some witnesses called the order a “blacklist” regulation that could bar good employers from government work because they received technical violations stemming from miscommunication or a misunderstanding about employer obligations. 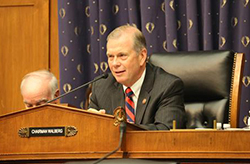 Workforce Protections and Health, Employment, Labor and Pensions subcommittee Chairman Walberg (R-MI) delivers the opening remarks during a Feb. 26 House hearing.
However, Karla Walter, an associate director of the American Worker Project at the Washington-based Center for American Progress, said the Executive Order merely requires employers to check a box to indicate if they have had a labor violation. The checked box does not bar the employer from receiving a contract, she said, but raises a “red flag” to the federal contracting officer to further investigate the matter before awarding a job.

Angela Styles, a partner at the law firm Crowell and Moring’s Washington office, argued that a robust and fair system is already in place to catch “bad actors,” and some federal agencies are better at using it than others.