We use cookies to provide you with a better experience. By continuing to browse the site you are agreeing to our use of cookies in accordance with our Privacy Policy.
Home » Hand-arm vibration syndrome
Worker health and wellness Workplace exposures Video
WIDESPREAD CONDITION, PREVENTION MEASURES LIMIT EFFECTS

Workers who use power tools may be at risk 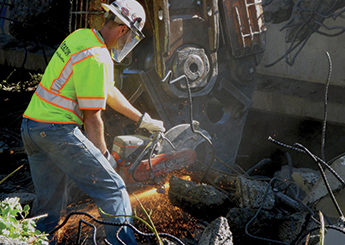 Stonecutters in Bedford who used air hammers during work shifts had reported experiencing numbness and discoloration of their fingers.

Among 38 stonecutters, Hamilton found that 89 percent reported “vibration-induced white finger,” according to research published in the British Journal of Industrial Medicine. Fast-forward to modern times, and the disorder is known as hand-arm vibration syndrome. Symptoms range from tingling, numbness, pain and “blanching” (loss of color) in the fingers, as well as weakened grip due to nerve and blood vessel damage, from using vibrating tools. In severe cases, gangrene can occur.

About 2 million U.S. workers are exposed to hand-arm vibration, and as many as half will develop HAVS, according to Frederick, MD-based occupational vibration consultant Donald Wasserman. Some experts believe the number may be higher because the disorder is sometimes unrecognized or underreported – and is sometimes confused with carpal tunnel syndrome.

“I’d go as far to say it’s probably the No. 1 neuromuscular disorder in the world in manufacturing and construction environments, the most costly, and underappreciated,” said Donald Peterson, dean of the College of Science, Technology, Engineering and Mathematics at Texas A&M University-Texarkana.

Workers who regularly use power tools in various industries – from construction and maintenance to mining and forestry – are at risk, as well as workers in colder climates.

Any kind of vibrating tool can result in hand-arm vibration, and longer exposure can increase the risk of developing HAVS, experts say.

Tools that have been linked to hand-arm vibration include:

These tools can cause hand-arm vibration regardless of whether their power source is electricity, gasoline or air, Wasserman said.

Hand-arm vibration syndrome can take six months to six years to develop and, after the fingers blanch, the condition is irreversible, according to NIOSH biomechanical engineer Daniel Welcome. Therefore, prevention is crucial.

“The whole thing boils down to prevention,” Wasserman said. “If you don’t catch it early enough – either stop the exposure, get that person out, change their job, do something else – it’s going to go from bad to worse.”

How can workers be protected?

Experts advise the use of anti- or low-vibration tools that are appropriate for the job. David Rempel, professor of bioengineering at the University of California, Berkeley, recommends employers purchase tools with lower handle vibration and reduce the hours of exposure per day.

“One of the simplest work practices is holding the tool with only the amount of force that’s required to keep it safely under control,” said Mark Geiger, occupational safety and health manager with the Washington-based Naval Safety Center Liaison Office. “People who grip a tool with a death grip increase the vibration coupling. They also fatigue themselves more quickly.”

A Defense Safety Oversight Council project has tried to improve the federal supply of low-vibration hand tools and protective equipment in federal shipyards. The General Services Administration now considers vibration when choosing and marketing power hand tools, Geiger said. About 130 such tools are available in the federal supply system. Outreach in the Department of Defense has increased awareness of HAVS, he added.

The use of anti-vibration gloves is controversial, according to Geiger.

A NIOSH study tested four types of gloves using medium- to high-frequency tools such as saws and grinders, and found that gloves lowered vibration to the palm 5 percent to 20 percent. Yet some gloves slightly increased or slightly decreased vibration with low-frequency tools.

Gloves are more effective at reducing vibration in the palm than the fingers because the palm absorbs vibration, Welcome said. Fingers may amplify vibration with a frequency of 100-300 hertz with or without gloves.

A worker will receive little benefit from anti-vibration gloves for a frequency under 25 hertz, he said, but noted that gloves are still effective at keeping the hands warm and protecting against cuts, abrasions and other exposures. Anti-vibration gloves also can be useful for holding a vibrating tool, such as a jackhammer, in place and allowing it to do the work.

Make sure the gloves have been tested by a third party and meet ANSI 2.73/ISO 10819 standards, which require the full hand to be covered, Geiger said. Similar to other protective equipment, gloves are the least preferred control measure.

“Reducing the [vibration source] is the most important thing one can do,” Geiger said. “But anti-vibration gloves are useful for a couple reasons. They keep the hands warm. They do reduce some shock. Anybody buying anti-vibration gloves has a partial solution and needs to be aware that, as protective equipment, they have intrinsic limitations.”

Wasserman stressed the importance of wearing ISO 10819-certified, full-finger gloves because HAVS starts in the fingertips rather than the palms of the hand.

“Many people, when they buy a full-fingered glove, don’t feel like they’re getting enough tactile feedback into the fingertips. They’ll cut the fingers off, leave only the palm area. Do not do that,” Wasserman said. “You might as well not have a glove on if you’re going to cut the fingers off.”

What are the standards?

Unlike the European Union, the United States has no regulatory standards for vibration.However, consensus standards similar to the EU standards provide assistance.

Standards and criteria related to vibration include:

Both the ANSI standard and the European Union standard set a maximum daily exposure of 5 meters per second squared of vibration acceleration for an 8-hour time-weighted average, and they require monitoring and controls above 2.5 meters/second squared for an 8-hour time-weighted average. Both standards also have a risk matrix that links exposure severity to potential HAVS medical outcomes.

“The EU standard has stimulated manufacturers to develop and market better products with lower levels of hand-arm vibration,” said Mark Geiger, occupational safety and health manager with the Washington-based Naval Safety Center Liaison Office. “While the marketing tends to focus on the European Union, the presence of the standard allows knowledgeable American customers to take advantage of the availability of better products.”

A look at Raynaud’s syndrome