We use cookies to provide you with a better experience. By continuing to browse the site you are agreeing to our use of cookies in accordance with our Privacy Policy.
Home » Workers stand more, burn more calories with sit-stand desks: study
Research/studies Worker health and wellness 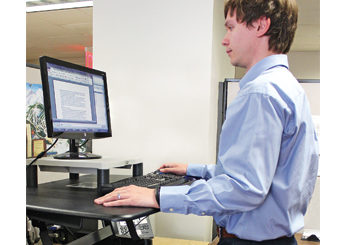 Iowa City, IA – Workers who use sit-stand desks stand for 60 more minutes and burn 87 more calories per day than workers who use traditional desks, indicates research from the University of Iowa.

Although the two groups had no differences in weight, blood pressure and heart rate, and percent body fat, “standing at work could be one piece of an individual's larger health plan that also includes healthy eating and physical activity," said Dr. Lucas Carr, assistant professor in the university’s Department of Health and Human Physiology. Carr added that research is needed to study how replacing sitting with standing affects cardiometabolic and musculoskeletal health.

The study was published online Oct. 1 in the American Journal of Preventive Medicine.