We use cookies to provide you with a better experience. By continuing to browse the site you are agreeing to our use of cookies in accordance with our Privacy Policy.
Home » GOP: DOL response to questions on joint employer guidance inadequate
Federal agencies Inspections

No Comments
Reprints
Education and the Workforce Committee OSHA inspections 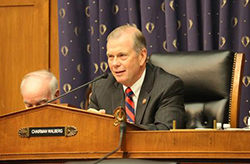 Washington – The Department of Labor’s response to a House committee inquiry into an OSHA joint employer guidance document neglected to include information that could contradict the department’s assurance that it was not coordinating with the National Labor Relations Board, members of the GOP-led committee allege.

Republican members on the Education and the Workforce Committee raised concerns about the guidance. In a Nov. 18 letter to the committee, Acting DOL Assistant Secretary for Congressional and Intergovernmental Affairs Adri Jayaratne denied that DOL coordinated with NLRB on the document, which he stressed was not a new standard and does not create a new policy. The document, which includes a list of questions that inspectors could ask to help determine joint employer status, is a tool to help compliance officers “consistently and appropriately apply OSHA’s policies and obtain the relevant facts,” according to Jayaratne.

But in a Jan. 19 follow-up letter, committee Chairman John Kline (R-MN) and Workforce Protections Subcommittee Chairman Tim Walberg (R-MI) cited three incidents occurring in mid-2015 in which representatives from NLRB and DOL either met or communicated regarding strategies addressing worker rights, franchisee cases and OSHA investigations. The three events happened after the committee’s request but before DOL’s response. The chairmen learned of the events through a Freedom of Information Act request.

“This information clearly demonstrates the department and the NLRB communicated directly on joint employer policies,” Kline and Walberg said in the Jan. 19 letter. “This new information – and the Department’s unwillingness over a period of months to fully cooperate with the committee’s request – calls into question the Department’s respect for Congress’s constitutional oversight authority.”

The chairmen requested a response from DOL by Jan. 26; details of a department response were not immediately available.