We use cookies to provide you with a better experience. By continuing to browse the site you are agreeing to our use of cookies in accordance with our Privacy Policy.
Home » New webpage on aerial lifts features hazard recognition simulator
Federal agencies Fall prevention Injury prevention 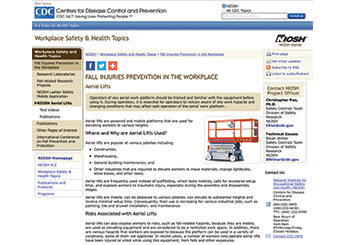 Washington – NIOSH has developed a webpage about aerial lifts and their risks to workers.

Aerial lifts raise workers to different heights in industries such as construction and warehousing. Workers may use the platforms instead of scaffolding because they are mobile and require less setup. However, aerial lifts present a fall risk.

The webpage links to requirements from OSHA and standards from ANSI for safe work practices. NIOSH also refers to related publications as well as videos that show laboratory tests of an aerial lift responding to different events – such as tilting, wind speed and curb impact – under OSHA and ANSI standards and manufacturer recommendations. In addition, an aerial lift Hazard Recognition Simulator allows users to operate a virtual aerial lift and identify hazards such as potholes.

Workers should be trained on proper use of aerial lifts, and they should be aware of hazards and conditions that could affect safety, NIOSH states.