We use cookies to provide you with a better experience. By continuing to browse the site you are agreeing to our use of cookies in accordance with our Privacy Policy.
Home » David Michaels leaves OSHA after 7 years
Federal agencies Leadership 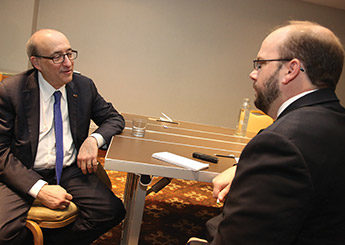 Washington – As expected, David Michaels has stepped down from his role as OSHA administrator to return to academic life.

Michaels departed on Jan. 10 as the longest-serving administrator in the agency’s history. His tenure began in December 2009 after being appointed by President Barack Obama and confirmed unanimously by the Senate. Michaels will stay in the nation’s capital, where he has rejoined the faculty of the Milken Institute School of Public Health at George Washington University.

OSHA Deputy Assistant Secretary Jordan Barab will serve as acting administrator until noon on Jan. 20. The agency did not specify who would be in charge following the inauguration of President-elect Donald Trump.

Michaels reflected on his seven-year tenure as OSHA administrator during an interview with Safety+Health magazine.

“The greatest satisfaction – in addition to working with OSHA staff, which is really committed, wonderful people – is focusing the agency on the most vulnerable workers and their worksites,” he said. “Because we know that many of the workers being injured are afraid to raise their voice, and they’re invisible in society in some ways – the workers who are sent by staffing agencies or who are picked up in lines outside of Home Depot or Lowe’s. We added to our focus working with worker centers, working with staffing agencies, putting out material in many languages, so we can make sure that all workers in the United States have that same right.”

“You have to be very imaginative and resourceful, to think about ways to look at problems differently, and to continue to be bold,” he said. “One of the things that I’ve been very proud of is using resources that are not traditional OSHA ones. When we saw the very high rate of deaths among cell tower climbers, we reached out to the FCC, and together we took the issue on, and I think that’s had a big impact. [I would recommend] to look at those allies you could work with to try to get the word out and have a big impact because we can’t do this ourselves.”