We use cookies to provide you with a better experience. By continuing to browse the site you are agreeing to our use of cookies in accordance with our Privacy Policy.
Home » 5 elements of forklift safety
Injury prevention 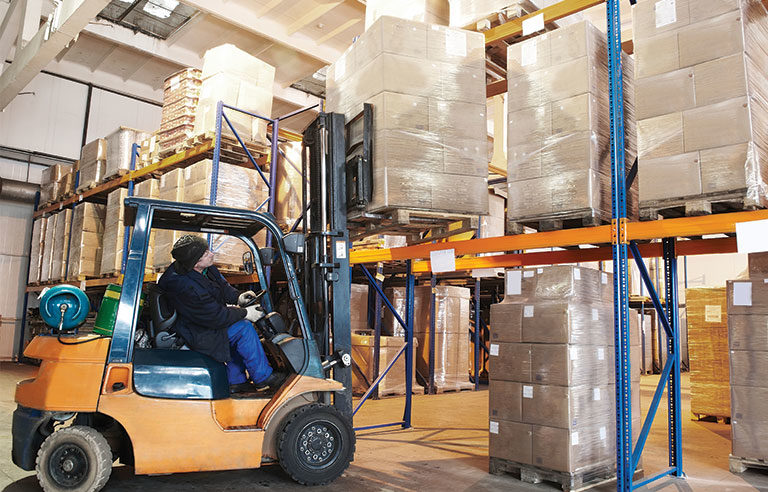 As it should, safety superseded speed during the forklift rodeo portion of the Blue Mountain Occupational Safety and Health Conference this past June in Pendleton, OR.

“They reinforce safety by constantly telling you to look over both shoulders while not looking up, keeping your seat belt on, exiting the forklift with three points of contact and not driving with the lift up,” Evans said.

Those are just a few best practices that can be used to foster forklift safety on the job. Safety+Health consulted safety professionals, agency officials and the National Safety Council to help shape the following five forklift safety guidelines.

A safety guide published by the Washington State Department of Labor & Industries states that workers without proper training and knowledge of forklift operation, as well as operators who maneuver forklifts carelessly, have an increased risk of injury or death.

A commitment to safety begins with proper training. The guide further states that “an untrained forklift operator can be as dangerous as an unlicensed driver of a motor vehicle.” OSHA’s Powered Industrial Trucks Standard – 29 CFR 1910.178 – establishes that “the employer shall ensure that each powered industrial truck operator is competent to operate a powered industrial truck safely, as demonstrated by the successful completion of the training and evaluation” outlined in the standard.

OSHA requires training programs to combine formal instruction, such as lectures and written material, with practical training and a workplace performance evaluation. Washington L&I Safety and Health Technical Specialist Drew Kertzman said that a prevalence of qualified experts and resources has allowed for improved training in recent years. Still, operators should be mindful of the differences between various types and models of forklifts and lift trucks.

“The gap that I’ve seen in the past is just presuming that once you’re trained on one forklift, you automatically know how to maneuver all forklifts,” Kertzman said. “As you get larger and larger (forklifts), they operate differently, and as you go from model to model, they are a little bit different.”

Operators are urged to inspect forklifts before each job, checking first the items that can be monitored without the engine running. Checkpoints should include seat belts, tires, lights, horn, brakes, backup alarms and fluid levels, as well as the moving and load-supporting parts of the forklift.

“It’s low-hanging fruit to have a beat-up truck sitting out there that any inspector can spot half a dozen things wrong with it from 40 feet away,” Kertzman said.

The Washington L&I citation process involves discussing the area(s) of code violation, explaining to the employer how the organization failed to comply and offering possible methods to resolve the issue.

“Then the employer is ultimately on the hook to decide what they’re going to do, and then make those changes in a timely fashion,” Kertzman said.

Know the machinery – and the rules

The National Safety Council’s training program for industrial and rough-terrain lift truck operators includes a discussion that may sound elementary to some, but nonetheless is vital to promoting driver, worker and bystander safety: Although lift trucks and personal vehicles share some similarities, they ultimately are quite different.

NSC urges operators to always wear seat belts. Neglecting to do so can cause an operator to be ejected from the forklift’s protective cage if the truck turns over, resulting in a possible serious injury or fatality.

An operator always should be aware of his or her surroundings on the jobsite, as the load or environment may obstruct visibility.

Evans stresses the importance of drivers being aware of, and making eye contact with, pedestrians or other workers during operation. OSHA best practices for maintaining visibility include:

Lift trucks are built on three-point suspension systems, the physics of which resemble a triangle. Support points lie at both ends of the front axle, with another located at the center of the rear axle. Together, NSC states, this forms a “stability triangle” that operators must stay within when the truck is in motion.

Numerous factors can cause a lift truck to vacate the stability triangle, including unstable, heavy, wide or raised loads; fast starts and stops; taking corners too quickly; and rough terrain.

OSHA advises operators to check loads before picking them up with the forks, ensuring the load’s stability and dimensions will allow for safe transport. Move squarely in front of the load and move the forks apart as far as possible before driving them under the load. Make sure to not overload and that the load is centered.

Slightly tilt the forklift mast backward before lifting. Lift the load enough to clear the floor or rack. For stacking, OSHA recommends lifting the load above the lower stack by about 10 centimeters, or 4 inches.

When placing a load, operators should be squarely in front of the placement destination, Washington L&I states. Make sure the area is flat and stable, and don’t place heavy loads on top of light ones. Lower the forks upon placing the load, and then back the forklift away. As always, ensure the load is stable.