We use cookies to provide you with a better experience. By continuing to browse the site you are agreeing to our use of cookies in accordance with our Privacy Policy.
Home » CSB names Kristen Kulinowski interim head
Federal agencies Leadership Manufacturing 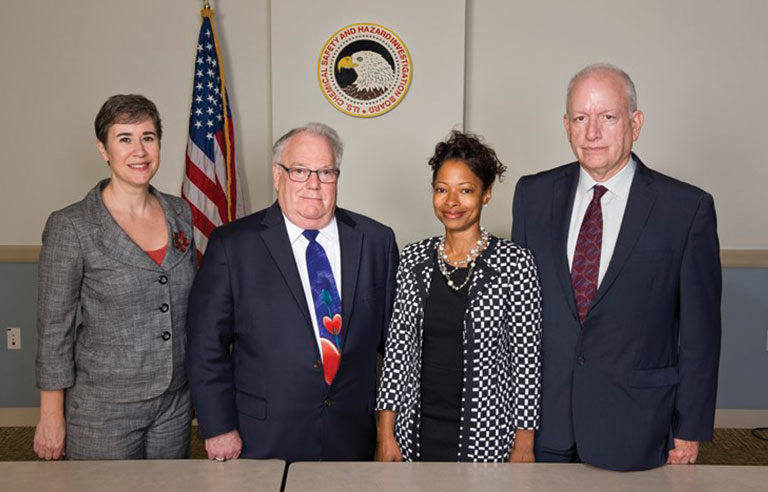 The members of the Chemical Safety Board (left to right): Kristen Kulinowski, Manuel "Manny" Ehrlich, Vanessa A. Sutherland (recently resigned) and Rick Engler

Washington — Kristen Kulinowski will serve as the “interim executive authority” of the Chemical Safety Board after Vanessa A. Sutherland’s resignation as chair, the agency has announced.

Kulinowski, who has served on the board since August 2015, has expertise in chemical and materials sciences, occupational health and safety issues, risk policy, nanotechnology, and research administration, according to a June 12 CSB press release.

“I am honored to serve in this new capacity,” Kulinowski said in the release. “I look forward to working with my fellow board members in continuing our shared commitment to the board’s important mission. I am committed to ensuring that the CSB’s current investigations are completed in a timely and efficient manner and that the lessons learned are available to industry, workers and members of the public.”

Before joining CSB, Kulinowski was a research staff member at the Institute for Defense Analyses’ Science and Technology Policy Institute and a senior faculty fellow in chemistry at Rice University for 13 years.

Sutherland stepped down in June for undisclosed reasons and with more than two years remaining on her five-year team. She took over as CSB chair in August 2015 after Rafael Moure-Eraso’s resignation amid congressional allegations of mismanagement.