We use cookies to provide you with a better experience. By continuing to browse the site you are agreeing to our use of cookies in accordance with our Privacy Policy.
Home » My Story: Tim Page-Bottorff
My Story 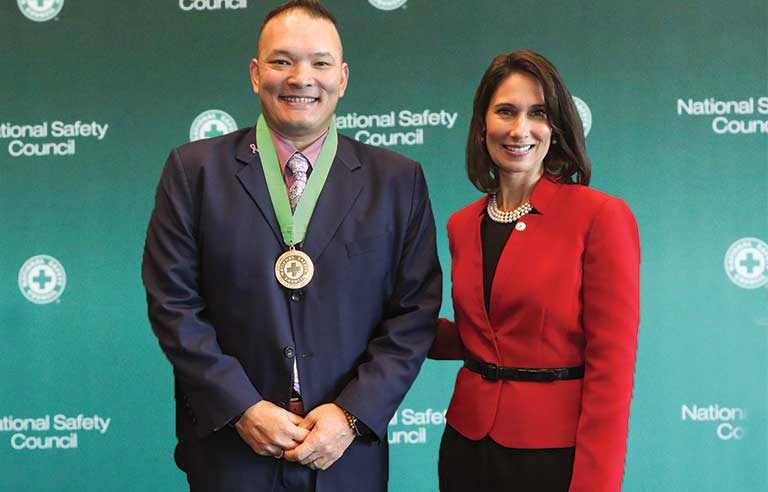 Tim Page-Bottorff receives the Distinguished Service to Safety Award from National Safety Council President and CEO Deborah A.P. Hersman (right) during the 2018 NSC Congress & Expo in Houston.
Getting started in safety didn’t happen without influence. I really wanted to be a professional baseball player or a high school band director when I graduated college, but life got in the way. Life forced me to make decisions that required immediate attention, such as joining the military. The branch of choice was the Marine Corps. But the choice wasn’t mine to make. It was the only branch that would accept me at the time without a long delayed entry.

I learned so much and have no regrets. I learned to work around jet aircraft and the fueling aspect while an aircraft was “hot.” (“Hot” means the aircraft’s engines are running.) I also learned all aspects of firefighting, training for emergency responses to chemicals via HAZWOPER, training in confined spaces and their respective rescues, and training for Department of Transportation hazardous materials shipments.

The training was enough to get me a job at Motorola in its environmental health and safety department right after leaving the military. Ellie Vargas was an amazing influence for me. In the short term, I delivered chemicals and inspected waste satellite accumulation zones while finishing my undergraduate degree. Once I graduated, I was asked to work in the safety department exclusively and deliver forklift training and manage safety programs. I am grateful to Jeff Buntrock and Tom Steeves for their influence.

I left Motorola to start my own business with partners to provide EHS training and consulting. Once I became a full-time consultant, I earned the CSP and started memberships in both the American Society of Safety Professionals and the National Safety Council. An integral activity I am consistent with is speaking at the major safety conferences each year. I have been speaking at major conferences, including the NSC Congress & Expo, for more than 10 years now.

Working with SafeStart has been the best gig I have ever had. I have Larry Wilson, Jack, Gary, Kevin and Danny to thank for their influence. Working at SafeStart, I still get to consult, train, work with people, and, most importantly, learn more every day. What I love most about what I do, I get to work with amazing people. People are the key on how I was influenced. People are the key to everything.

‘We’re home’: Tim Page-Bottorff special guest of ‘On the Safe Side’ at Congress & Expo