We use cookies to provide you with a better experience. By continuing to browse the site you are agreeing to our use of cookies in accordance with our Privacy Policy.
Home » COVID-19 pandemic: Republican House members call for OSHA emergency standard
Federal agencies Workplace exposures 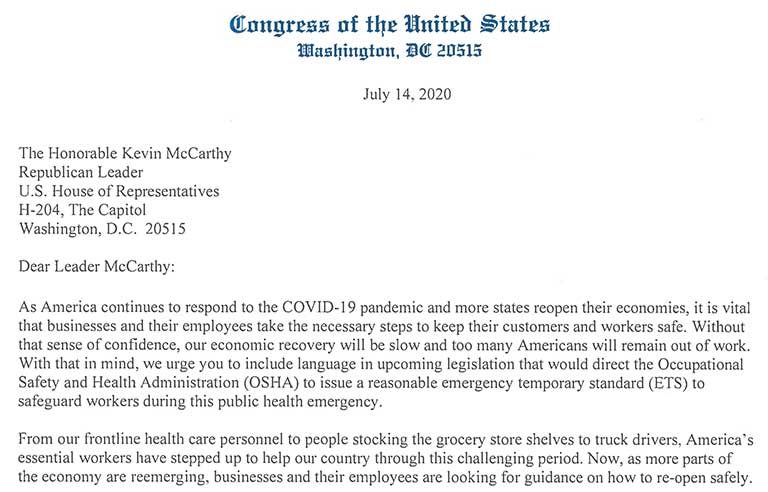 Washington — A group of 10 Republican members of the House is urging GOP leaders to develop legislation directing OSHA to issue an emergency temporary standard on infectious diseases to “safeguard” workers amid the ongoing COVID-19 pandemic.

In a letter sent July 14 to House Minority Leader Kevin McCarthy (R-CA), the lawmakers – led by Rep. David McKinley (R-WV) – push for an ETS in lieu of the “suggested and not enforceable” industry-specific guidance OSHA has developed to date.

“Issuing an emergency standard would protect the health and safety of millions of Americans and reduce the size of a ‘second wave’ of infections as the economy re-opens,” the lawmakers wrote. “While protecting the safety of workers is our foremost priority, we also should be focused on reducing uncertainty for employers.”

Noting that “most employers and their workers are relying on a patchwork of guidance” from the Centers for Disease Control and Prevention and state and local authorities, the lawmakers say an ETS also would protect employers from “frivolous lawsuits” from employees or customers who might become infected with the novel coronavirus causing the COVID-19 pandemic.

In April, a group of 29 senators (27 Democrats and two independents) sent a letter to Secretary of Labor Eugene Scalia asking for an ETS. In addition, the senators called on OSHA to develop “additional interpretations regarding existing standards to increase enforceable protections” as well as “comprehensive” guidance on what employers must do to protect workers.

Despite being pressed to issue an ETS, federal OSHA officials have consistently repeated the agency’s position that existing rules – including its General Duty Clause – are sufficient to protect workers during the pandemic.