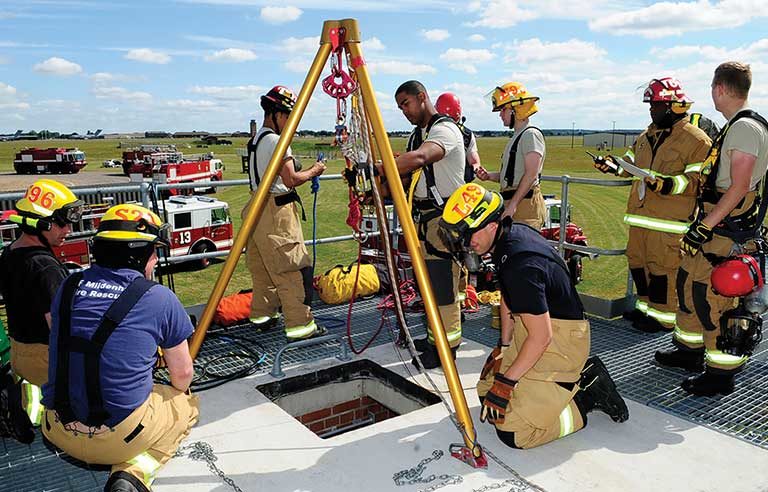 ‘We can call 911 or rely on emergency responders to be our rescue team.’

OSHA regulations require covered establishments to have the ability to “reach the victim(s) within a time frame that is appropriate” for the pertinent hazard in the confined space.

In the non-mandatory Appendix F of 1910.146, OSHA offers two examples. In situations where a permit-required confined space has an atmosphere that is an immediate threat to life or health, the agency recommends having a rescue team or service at the space.

“On the other hand, if the danger to entrants is restricted to mechanical hazards that would cause injuries (e.g., broken bones, abrasions), a response time of 10 to 15 minutes might be adequate,” the agency says.

The National Fire Protection Association’s “Guide for Safe Confined Space Entry and Work (350)” divides emergency responses into three tiers:
Tier 1: The space contains no potential for hazards but “its configuration would prohibit entrants from being easily removed” if they became incapacitated by a medical issue. Setup and rescue entry should be within 15 minutes of arrival onsite.
Tier 2: The space contains no immediate danger to life or health or other life-threatening hazards, but contains other actual or potential hazards that could prevent entrants from exiting unless assisted. A rescue team should be “equipped and mobile and capable of setup and rescue entry” within 12 to 15 minutes of the incident occurring.
Tier 3: The space contains a hazard(s) that is a threat to life and health. A rescue team should be set up and ready for entry within two minutes of the incident occurring.

During his presentation, Lange shared the results of an informal survey he conducted among Wisconsin fire chiefs. He said 36% reported they weren’t capable of responding to a confined space emergency. Of those who said they could respond, 31% could be ready for entry within 10 to 20 minutes, 20% said 20 to 30 minutes and 7% said they would need more than 30 minutes. That doesn’t include response time, Lange added.

“This is Wisconsin, but my guess is you could kind of filter this out to most of your areas as well,” he said. “Most states are probably pretty similar to this.”

Also, if you’re relying on a fire department or other emergency responders to act as your onsite rescue team, what happens if they get a call that takes them away?

“If they are your rescue team, you’re done,” Lange said. “You’re shut down until they come back.”

Lange and Consider recommend that if you’re going to rely on emergency responders as your rescue team, get it in writing.

“OSHA recognizes that not all rescue services or emergency responders are trained and equipped to conduct confined space rescues,” the agency states in a 2016 fact sheet titled, “Is 911 Your Confined Space Rescue Plan?” “When employers identify an offsite rescue service, it is critical that the rescuers can protect their employees. The emergency services should be familiar with the exact site location, types of permit-required confined spaces and the necessary rescue equipment.”

‘We only need rescue training once a year.’

It’s true that OSHA regulations require affected employees to practice permit-space rescues at least once a year. Ideally, Rood said, rescue practice would take place about once every three months. He added that the best rescue teams his organization works with typically practice multiple times a year.

Whatever equipment is needed, ensure a rescue team or employees know how to use it. “If you don’t use these items on a regular basis, it’s not going to work when you need it,” Lange added.

Affected employees should also be properly trained on assigned rescue duties, as well as basic first aid and CPR. At least one available member of the rescue team must have a current certification in both areas.