We use cookies to provide you with a better experience. By continuing to browse the site you are agreeing to our use of cookies in accordance with our Privacy Policy.
Home » Walsh makes a case for increased OSHA staffing during Senate subcommittee hearing
Federal agencies Leadership 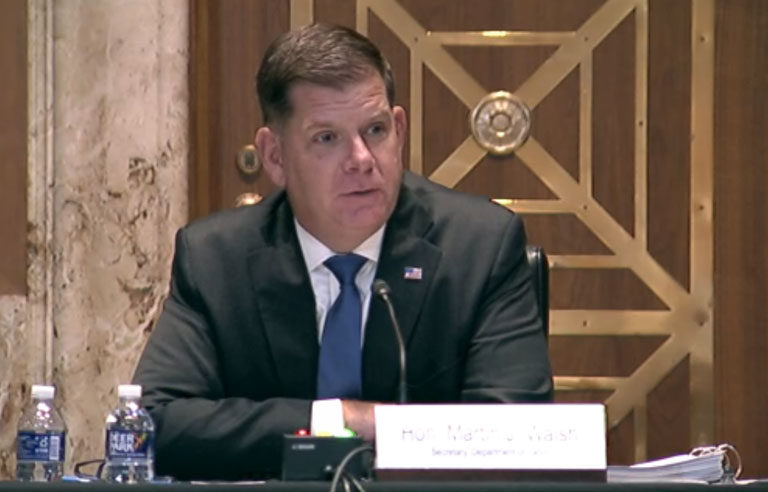 Washington — Staffing levels at OSHA and other agencies was among the topics Labor Secretary Marty Walsh addressed during a July 14 Senate appropriations subcommittee hearing.

In written testimony provided ahead of his appearance before the Senate Labor, Health and Human Services, Education, and Related Agencies Subcommittee, Walsh notes that the Department of Labor’s worker protection agencies lost 14% of their personnel over the past four years. During the hearing, he added that DOL overall lost around 3,000 employees over that same period.

“If we don’t have the staff and don’t have the employees to protect the workers, then we can’t be on the jobsites,” Walsh said. “We can’t make sure people are working in safe conditions.”

In its fiscal year 2022 budget request to Congress, DOL is requesting $2.1 billion for its worker protection agencies, including OSHA and the Mine Safety and Health Administration. That would be an increase of $304 million from its FY 2021 budget. DOL is receiving additional money from the American Rescue Plan.

Walsh said the ARP funding will help OSHA replenish its “severely understaffed” corps of inspectors. Additional funding from Congress would help enhance the department’s outreach and consultation, among other aspects.

“I would like to get OSHA back to where we’re doing a lot more collaboration, working with businesses to make sure we create safe worksites across America rather than having to respond to a tragedy,” Walsh said.

DOL also is seeking to double its number of whistleblower investigators – currently at 360 – over the next three years.

The administration is proposing an 11.3% increase in federal OSHA enforcement, to $254.6 million from $228.7 million, and a 14.5% increase in federal compliance assistance, to $86.2 million from $75.2 million. That enforcement budget includes 155 new OSHA inspectors, called compliance safety and health officers. OSHA had the fewest number of inspectors in its 50 years – 752 – in FY 2019, according to a Bloomberg Law report published in November. That number increased to 790 in FY 2020.

“Every administration should, and has every reason to, make some changes,” subcommittee ranking member Sen. Roy Blunt (R-MO) said in his opening statement, “but I think this budget makes way too many changes in way too short of a time.”