We use cookies to provide you with a better experience. By continuing to browse the site you are agreeing to our use of cookies in accordance with our Privacy Policy.
Home » Reflective vehicle markings plus high-intensity lights may make first responders harder for drivers to see
Research/studies Fire/emergency medical services Law enforcement 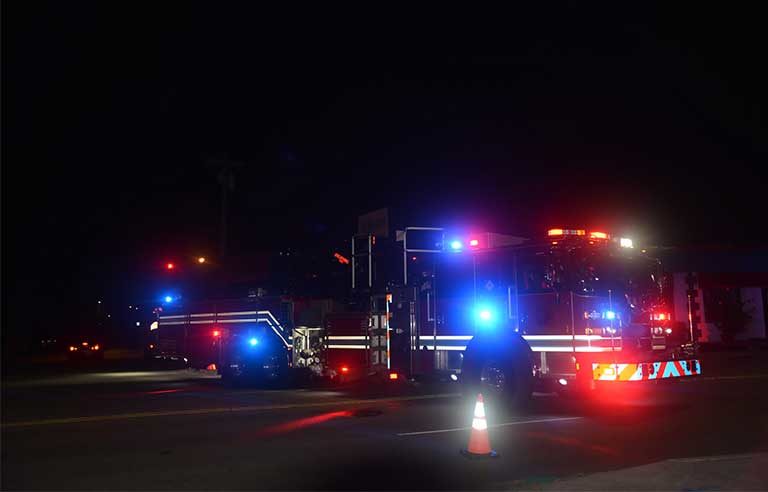 Harrisburg, PA — The combination of high-intensity lights and high-visibility markings on emergency vehicles may make first responders working nighttime roadway scenes difficult for approaching motorists to see – even when the responders are wearing hi-vis vests, the “surprising” results of a recent study show.

In collaboration with the U.S. Fire Administration, the Lighting Research Center at Rensselaer Polytechnic Institute and Embry-Riddle Aeronautical University, researchers from the Emergency Responder Safety Institute asked 20 volunteer civilian drivers to approach different emergency lighting setups on a closed course at night. The setups – designed to mimic a traffic incident scene – featured a silhouette cutout of a firefighter wearing a hi-vis safety vest along with 14 combinations of lamp color, lamp intensity, pattern, flash rate and presence of reflective markings next to the lights.

During each simulation, the researchers measured vehicle distance to the lights and the distance from which the drivers could distinguish the silhouette. The drivers completed a survey afterward.

“Reflective markings may increase the amount of scattered light entering the eyes of a driver, thereby making the responder less visible,” ERSI says in a press release, adding that future research is planned to see whether “lower grade retroreflective markings” will make emergency personnel more visible to drivers in those situations.

Among the other findings, lower-intensity lights at scenes remained “highly visible” to the drivers. Using those lights may reduce discomfort from glare without sacrificing visibility. Additionally, red lights for stationary blocking operations may provide better visibility with less glare compared with blue or yellow lights.