We use cookies to provide you with a better experience. By continuing to browse the site you are agreeing to our use of cookies in accordance with our Privacy Policy.
Home » New to the job
Training

New to the job “There’s a real workers’ market,” said the former OSHA area director, who runs his own training business. “It’s just a nightmare to hire people. You’re either trying to get them right out of high school and train them or you’re trying to advertise heavily.”

It’s a phenomenon that spans the country. As employers struggle to fill open positions, many are turning to inexperienced workers – of all ages.

“When we talk about inexperienced workers, my first thought goes straight to younger employees, but that’s not necessarily the case,” said Bruce Loughner, a technical safety advisor for the Ohio Bureau of Workers’ Compensation. “In today’s world, you can have more mature workers starting a job that they’ve never done before.”

This presents an added challenge for safety professionals: a larger number of workers who aren’t familiar with the risks and hazards related to their role.

Associate Editor Barry Bottino discusses this article in the June 2022 episode of Safety+Health's “On the Safe Side” podcast.

“Inexperienced workers are usually eager to show the employer that they’re valuable,” Loughner said. “So they may want to impress the employer to gain their trust and respect. Sometimes they’ll take more risks to improve their productivity, take a shortcut, or follow some other non-established safety procedure or protocol.”

All of these can raise the risk of injury. Nonfatal injuries among workers with less than three months on the job increased 8.4% in 2020, according to Injury Facts – an online source of preventable death and in-jury statistics compiled by the National Safety Council.

A 2019 case study report of Tennessee construction workers published by CPWR – The Center for Construction Research and Training concluded that, between 2014 and 2015, nearly half of the workers injured were on the job less than 12 months.

OSHA spokesperson Kim Darby recommends that employers, regardless of industry, perform job safety analyses to identify the hazards inexperienced workers may face. “Your OSHA 300 log or workers’ compensation records are a good source of information about the most common hazards in your workplace,” she said. 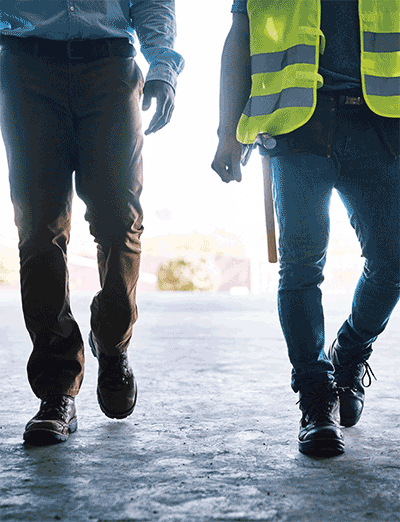 When workers step into a new role, especially in an industry that’s also new to them, safety needs to be introduced immediately via the onboarding process. That process “needs to be robust, and it just cannot cover the bare minimum,” Loughner said. “It’s important to have a significant onboarding program. That has to go way beyond the safety orientation and the compliance issues.”

Kim Esposito is director of safety and risk management for Exton, PA-based HSC Builders & Construction Managers. During onboarding, she sits down with new hires and a safety manager to talk about the organization’s safety manual, 360-degree safety checks on the jobsite, processes and procedures, and situational awareness.

“Just having that extra talk about it in the beginning helps,” said Esposito, who also serves as an executive committee member for the Mid-Atlantic Construction Safety Council. “When they go out onsite, they take a second thought and say, ‘OK, let me do a 360 and check my area.’”

On the Safe Side podcast Episode 13: Situational awareness on the job and safety leadership amid COVID-19